Many would be surprised to learn that emus and ostriches are farmed for their feathers, skin, eggs, fat/oil and meat. Emus and ostriches are apart of the ratite family; flightless birds without a keel on their sternum (breast bone). Emus are a native Australian animal who play an essential role in the ecosystem dispersing seeds, but are now farmed all over the world. Ostriches are native to Africa and are the world’s largest flightless birds. Though not a species of specific concern, ostrich populations have been declining in recent history due to hunting, illegal predation of eggs by humans, habitat degradation, and climate change.

Although research suggests that natural mating is the prominent method used in ratite farming, the industry has a particular interest in developing ‘reliable’ artificial breeding processes. This is so that ratites may be subject to genetic manipulations in order to make the industry more ‘economically viable’ for humans  [1] [2].

Currently to breed ostriches and emus males and females are housed together so that they will breed with one another naturally. In the wild, male emus sit on eggs for the entire incubation period (56 days), as well as care for hatchlings until they are 18 months old. Male and female ostriches share the responsibility of incubating their eggs and, once hatched, chicks remain with their fathers for up to two years. In ratite farming, eggs are commonly taken to be incubated under artificial conditions, and hatchlings raised away from their parents [1][2].

Artificial breeding is viewed as the only practical method of ‘genetic improvement’ in ratites, and continued research and trials are being done with the aim of establishing methods to do so [1]. ‘Genetic improvement’ refers to the genetic manipulation of non-human animals through selective breeding to produce offspring with qualities found desirable by humans as well as eliminating qualities humans consider undesirable.

The artificial breeding process involves a human arousing an animal so that they may take advantage of their reproductive organs. For males ratites, this involves the use of teaser and dummy females in order for their semen to be collected.

For female ratites, this involves a person touching and rubbing her back, the base of her tail, and the sides of her abdomen to induce the sexual crouching position, followed by the person injecting her with male semen. In female ostriches, this entails a human forcing their hand inside her with a semen straw; in emus, this involves the semen straw itself being forced inside them [1].

Toe-trimming is the standard industry practice of removing the ends of the toe in day-old emus and ostriches. This is done to “decrease skin injuries caused by claws and to reduce stereotypic aggression” [1]. 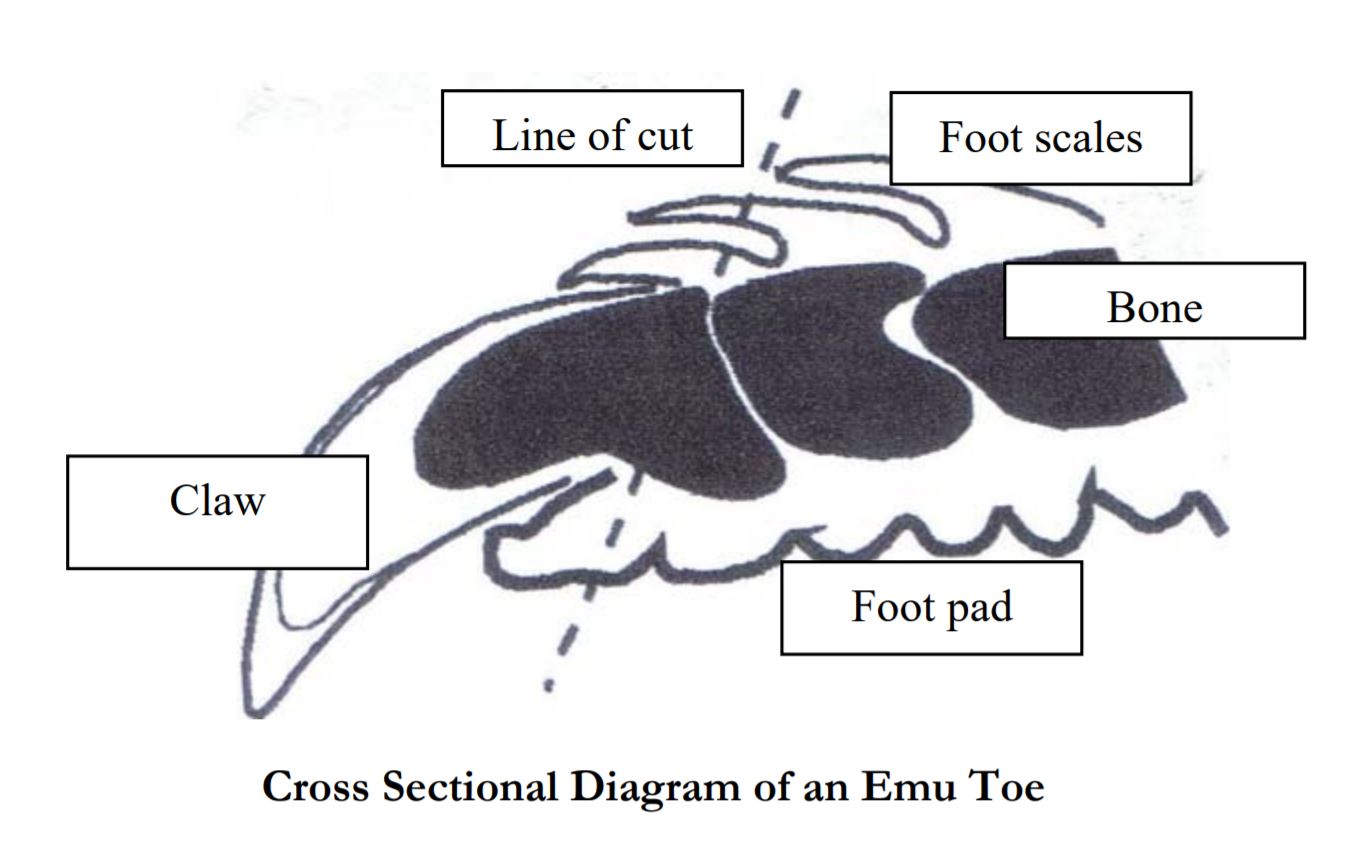 Due to the unnatural conditions ratites are forced to live in on farms, the risk of causing injury to one another is high, either accidentally or through acts of aggression caused by frustration. Injuries to birds will ultimately damage the final product, their skin, making them less profitable to producers. In order to avoid this ‘product damage’, the industry toe-trims ratites.

A hot blade, often a beak trimming machine used for poultry, is used to slice off the end of their toes, preventing them from regrowing. Some standards also suggest shears are appropriate to perform the procedure. 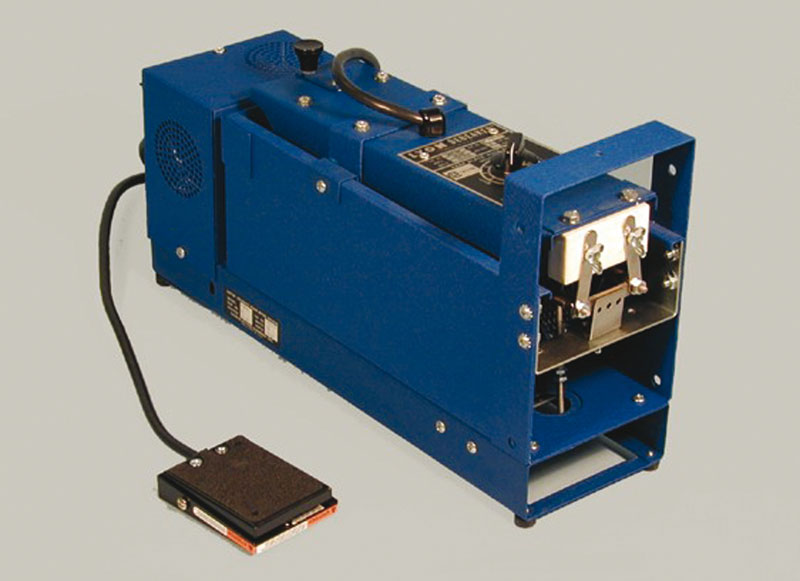 Despite industry insistence that toe trimming is in the interest of animal welfare, it is important to recognise if animal welfare was a priority, animals would not be forced to live in conditions that make such procedures necessary in the first place.

Both emus and ostriches can be raised in intensive, semi-intensive, or free-ranging conditions. Intensive conditions are often desirable to producers as more profit (flesh, skin, oil/fat, eggs, and feathers) can be produced on a smaller portion of land. 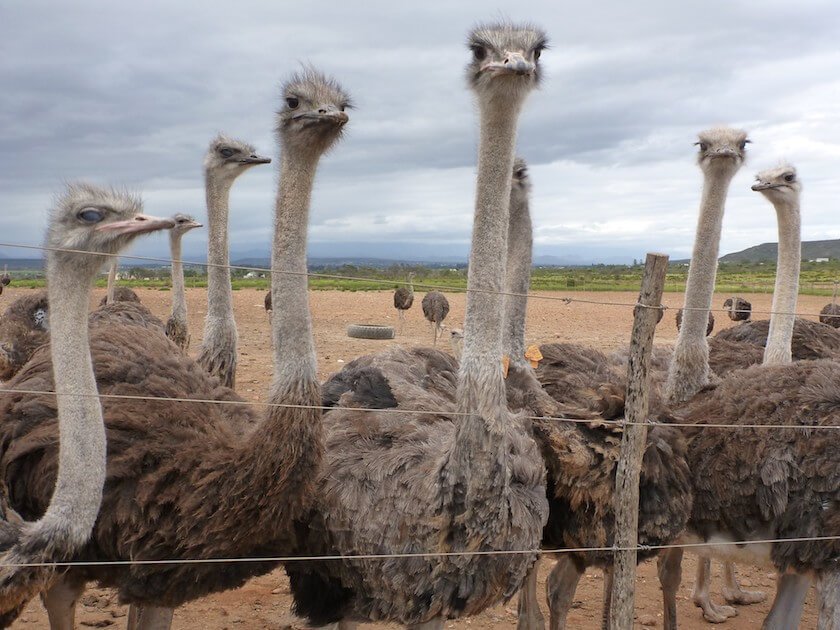 In the wild both species spend up to two years with their father learning life skills, however, in the ratite farming industry chicks are sadly deprived of this paternal guidance, instead living in group housing from the time of hatching. 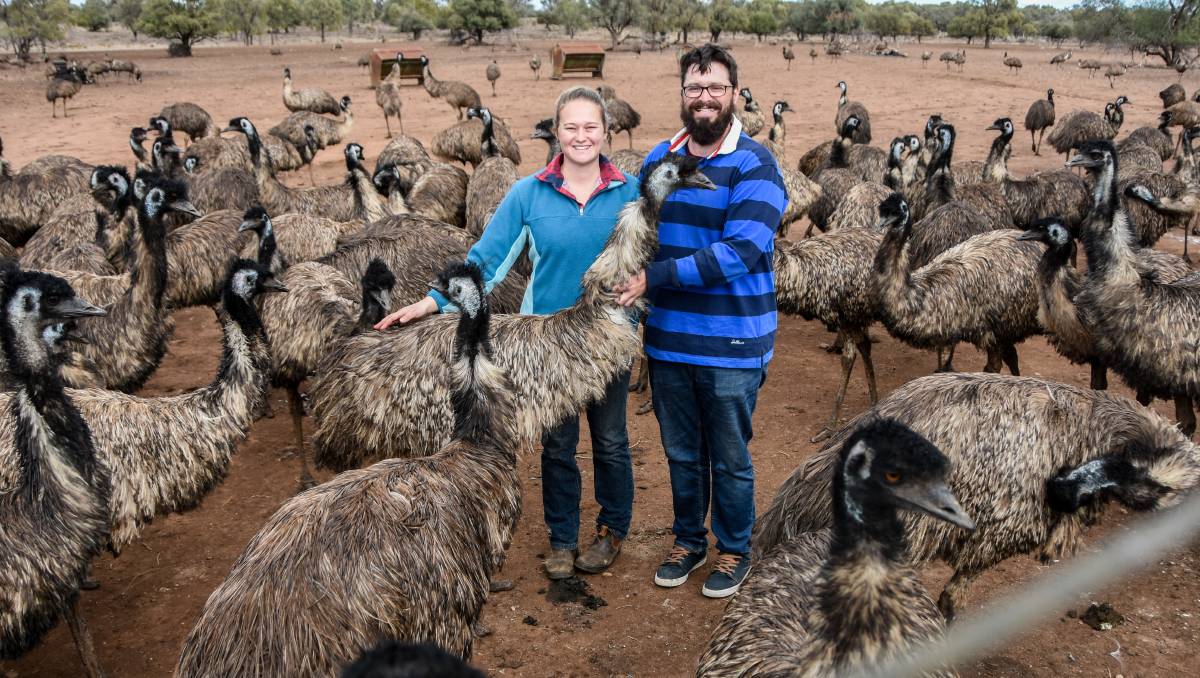 Codes of practice outline a number of flippant suggestions on the ways in which ratites can be housed, with a clear lack of regard for their wellbeing.

There is always a heightened risk of illness and disease outbreaks when keeping animals in intensive farming conditions. Ammonia from urine can build up in housing facilities, which can lead to burning in the eyes and respiratory issues.

Intensively farmed emus are known to suffer from panting, coughing, bodily swelling, and lameness. Ostriches possess a genetic predisposition to leg rotation, which, in addition to bruising, can occur as a result of handling and other trauma.

Live plucking is a common industry practice in ostrich farming so that their feathers may be used by luxury fashion houses. Birds are ‘hooded’ and restrained, unable to escape as their feathers are painfully ripped from their bodies. Thankfully this practice is outlawed in some countries around the world including Australia, however, it is still legally acceptable in a number of countries around the world.

You can learn more about feathers used in fashion here.

It is standard, legal practice to kill chicks that are deformed, abnormal, or not ‘thrifty’, by cervical dislocation or decapitation [1][2]. Essentially, any animals that might require extra care or are somewhat different should be killed because they won’t be profitable or will require too much time and care to raise. 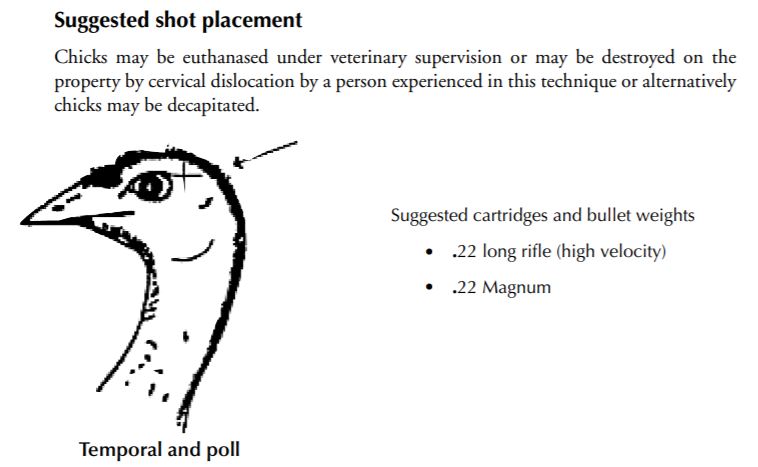 Suggested methods of killing in codes of practice.

Adults can also legally be killed on farms by being shot in the brain with a rifle [1].

Transportation is known to be a particularly stressful experience for ratites [1][2]. Australian codes outline transportation should be kept to a minimum, however, in the absence of abundant slaughtering facilities, this is often impractical.

In Australia, ratites are known to be forced to endure travel of up to 36 hours. Given the ratite industry being quite niche, this issue likely rings true for the wider-world, meaning ratites are often subjected to long, stressful travel across the globe. 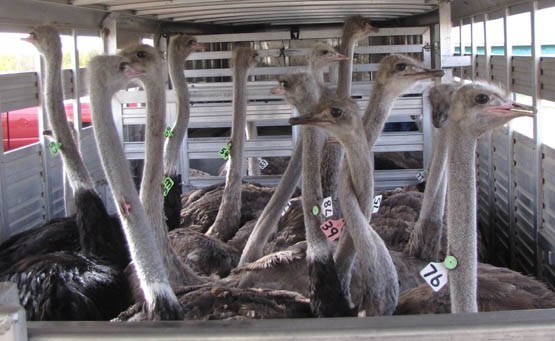 Ostriches on a transport truck to slaughter.

Prior to being killed ratites are required to be kept without food for 24 hours, however given the long journeys they are forced to endure, it is likely they are deprived of food for much longer.

Ratites are restrained and stunned with an electrical stunner or shot with a captive bolt gun or rifle before their throats are cut and their bodies bled out. 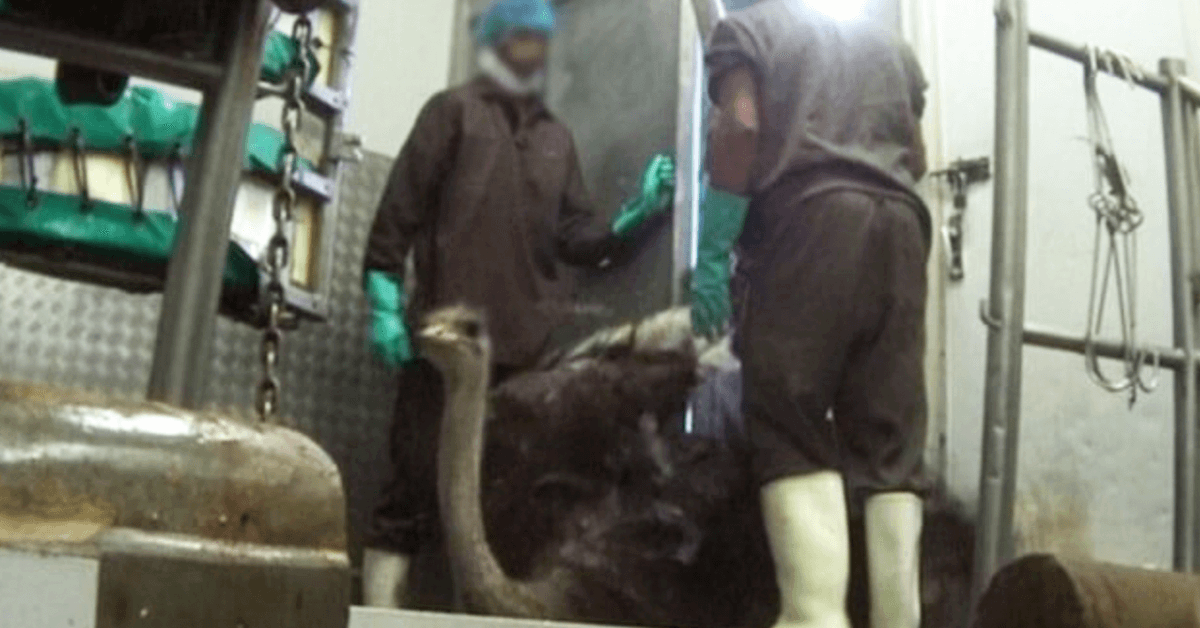 An ostrich in a slaughterhouse before being killed.

Both electrical stunning and captive bolt stunning are known to often be ineffective or inaccurate, either needing to be redone multiple times, causing pain and suffering to the animal, or leaving them to be slaughtered while still having sensibility/consciousness.
Investigations into the ostrich farming industry have revealed birds having their throats cut whilst conscious, while others watch on terrified, as well as workers hitting and striking at the birds [1][2].

Research has found that the ammonia produced by an ostrich farm is higher than that of a broiler farm. Ammonia (NH3) is a chemical compound released by waste on ostrich farms, made up of dead birds, feathers, faeces, broken eggs and other organic matter.

This is problematic if this waste is not sufficiently disposed of, as ammonia can contribute to eutrophication. Eutrophication occurs when a body of water becomes over-enriched with minerals, causing algae blooms, effectively depleting oxygen levels in the water, killing fish and other marine life. Eutrophication creates uninhabitable dead zones in both fresh and saltwater.

There have been a number of studies conducted into the detrimental mental health impacts of slaughtering animals on workers, finding it can even cause PITS (perpetration-induced traumatic stress). This disorder is one that relates to the mental anguish that is associated with committing violent acts. Being exposed to and involved in causing suffering to others is undoubtedly harmful, and has the potential to change the way someone feels, acts, and thinks.

Indeed, studies have revealed that violent crimes like domestic and sexual violence are more prevalent in areas around abattoirs, likely connected with the mental unhealth of workers.

Carrying out systemic violent acts against animals is certainly unhealthy and unnatural for most people within society. You can read the saddening confessions of a slaughterhouse worker here.

If you would like to learn more about the human-related impacts of the animal harming complex you can do so here.