Goats are intelligent, curious and cheeky creatures. They recognise the faces of their friends and, similarly to dogs, turn to humans for help in some situations. Goats are complex and emotional, with one study even finding they are more attracted to smiling, happy human faces. Goats are exploited for their flesh, milk, fibre and skins around the world. Goats are truly incredible, charismatic creatures, deserving of autonomy and respect.

According to the Food and Agriculture Organisation (FAO) of the United Nations (UN), over 450 million goats are killed annually around the world.

Naturally, goats can live up to 20 years old. Sadly, in the animal agriculture sector many are killed before they even reach one year old. 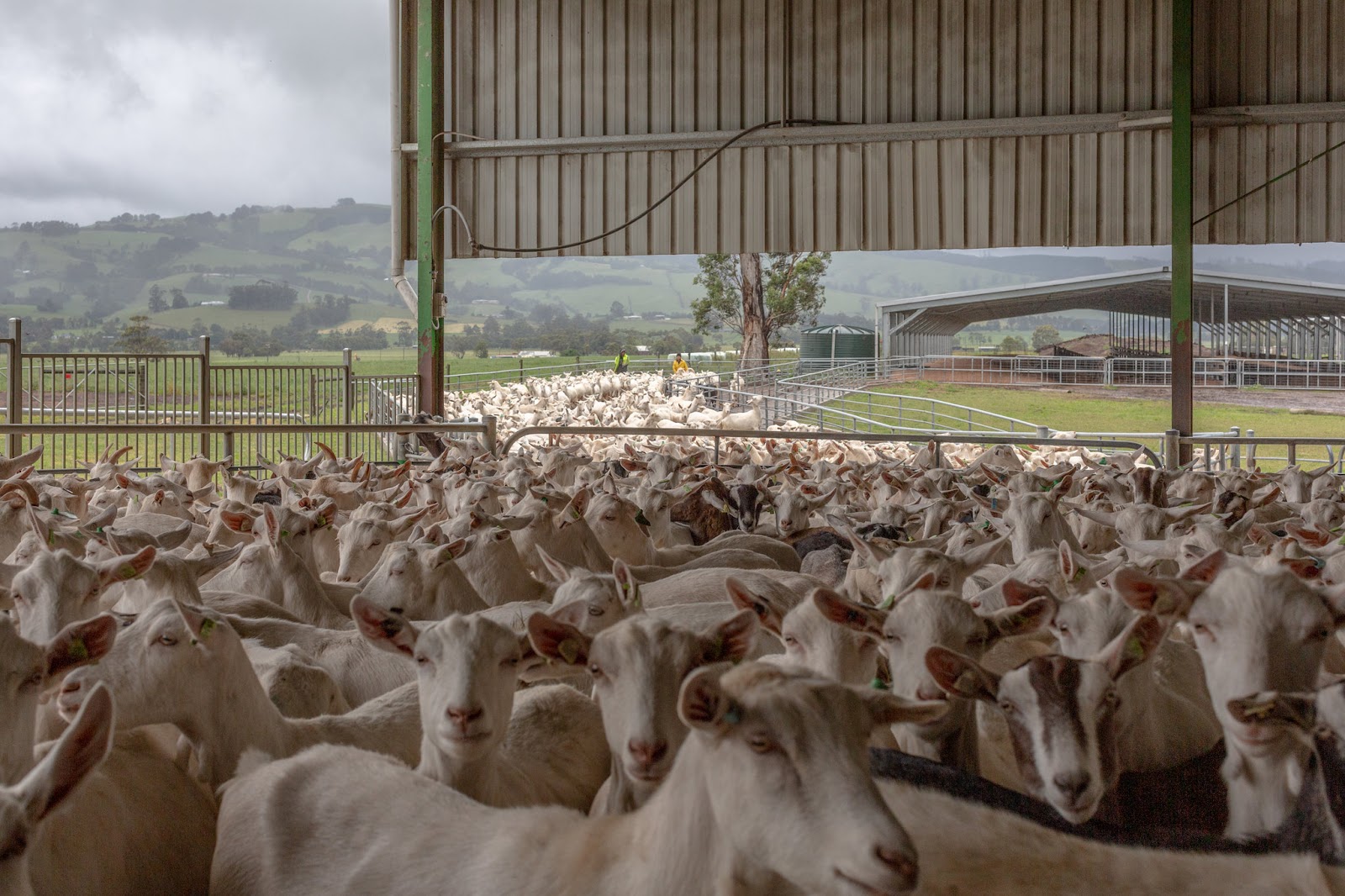 Female goats lining up to be milked.

In a similar way to cattle, goats are exploited for their milk production. This is a continued, exploitative cycle of re-impregnation, removing babies from their mothers within hours of giving birth, milking and eventual slaughter.

Does (female dairy goats) are mated multiple times a year to keep production of milk consistent and of a particular quality. Natural breeding is generally used in the goat dairy industry. Does are impregnated for the first time at 19 months and carry their babies for 150 days before they give birth to them.

Almost immediately (within 24 hours) dairy kids are taken from their mothers so that the milk intended for them can be consumed by humans. Research has shown mother goats remember their kid’s voice for up to a year after they have been separated from them. Unsurprisingly, being separated from one another is traumatic for both mother and kid.

Male kids, like male calves, are largely considered waste products of the dairy industry; never being able to produce milk, they seldom represent any economic value to dairy farms. Most male goat kids are slaughtered on-site in dairy farms as there is no real market for sending them to abattoirs as babies. Legally acceptable methods for killing male goat kids includes use of a captive bolt pistol that pierces their brain and firearms. It is also legal for kids to be killed by blunt force trauma in the first 24 hours of life; this means that kids can be killed with a blow to the head from a hammer, rock or metal pole 1,2,3,4.

Bodies of slaughtered male goat kids and discarded mothers can often be found in large ‘dead piles’ on the properties of goat dairy farms.

In order to make goats easier to control and ensure they are less likely to ‘damage’ one another living in such cramped, confined conditions, many farms disbud female goats in their first week of life. 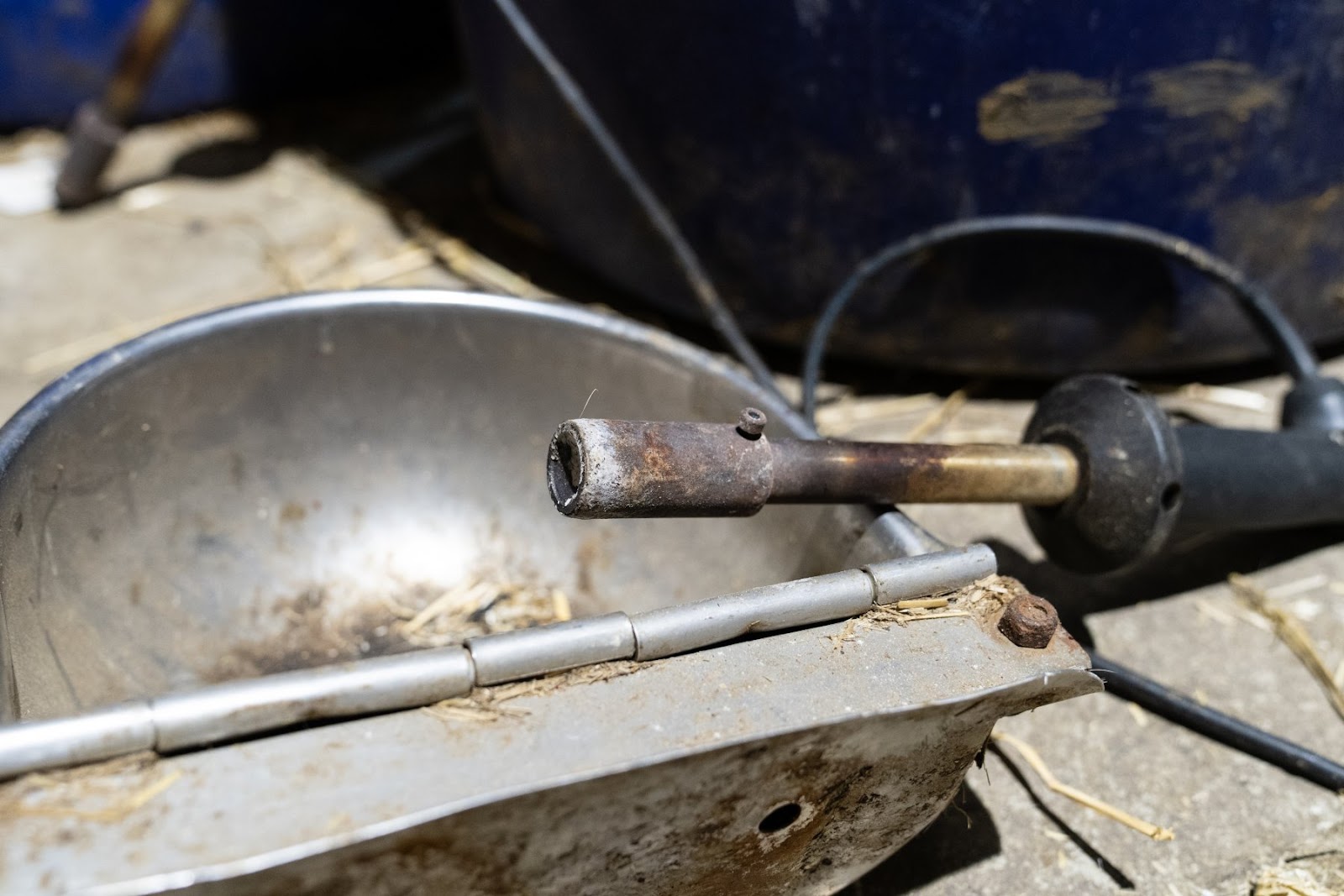 Disbudding is a painful procedure that ensures goats’ horns don’t grow. This is done by pressing a hot iron into the head of goat kids, where their budding horns are, killing the tissue and preventing future horn growth. It is legally acceptable to undertake this procedure without the use of any pain medication. Investigation has revealed goat kids screaming out in terror and agony as they are forced to endure this horrifically painful procedure.

Once the production of does begins to slow and their bodies are no longer able to withstand the continued breeding and milking that they are forced to endure, they are killed. Meat and Livestock Australia outline that ‘it is not economically viable to carry and join does that are not going to perform well, or that produce low value progeny’. In layman’s terms this means, it is not good for business to keep goats that won’t make you the most amount of money possible.

Huge dead piles can usually be found on goat dairy farms littered with the bodies of discarded mothers and culled male goat kids.

CAE is a major health concern among goat dairy herds. There are several goat dairy herds in Victoria that are known to be infected with CAE, a severe and chronic viral disease for which there is no cure. CAE is transmitted through infected colostrum, milk or blood. CAE is characterised, as the name suggests, by painful arthritis and swelling of the joint capsule which leads to lameness.

Goats killed for their flesh

Australia is the largest exporter of goat meat in the world, capturing around 90% of goats slaughtered from the wild, with only 10% accounted for by farmed goats. Approximately 95% of goats killed in Australia are exported overseas. Rangeland goats are considered a ‘pest’ in Australia; they are round up in the wild and then trucked down to slaughterhouses to be killed. It is not uncommon for females to become separated from their babies in this process, leaving the babies behind to starve or be trampled on during the herding. The stress of capture often induces labour and does (female goats) commonly give birth to their babies aboard slaughter trucks, often leaving truck drivers and abattoir workers at a loss with what to do with them. 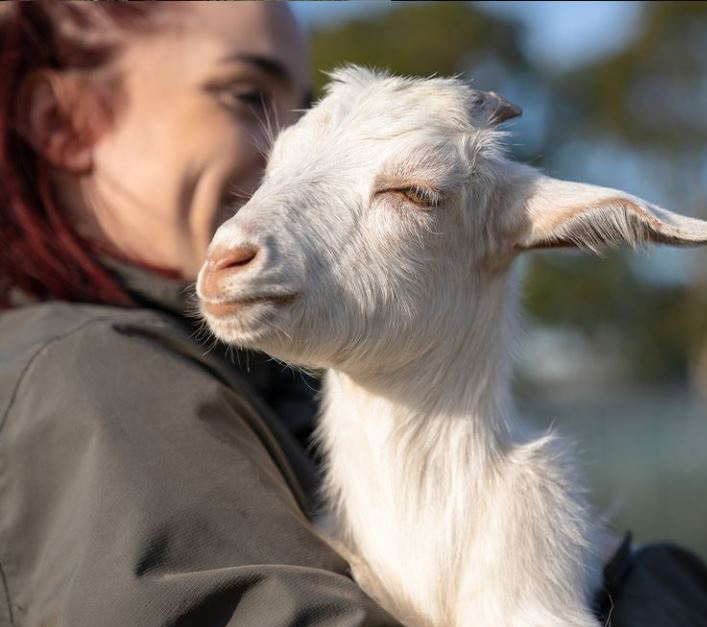 Angie was born aboard a slaughter truck. The truck driver surrendered her to a rescue group after dropping her mother at the slaughterhouse.

Though this cruel practice is justified under the guise of removing a ‘pest’ species, there are management systems in place to ensure there is always a population of goats to be captured and sent to slaughter for profit.

Every year hundreds of millions of goats are killed and skinned so that their skin can be turned into leather for humans. Goat leather is a co-product of the meat and dairy industry, and the purchase of skins directly supports these slaughter industries. 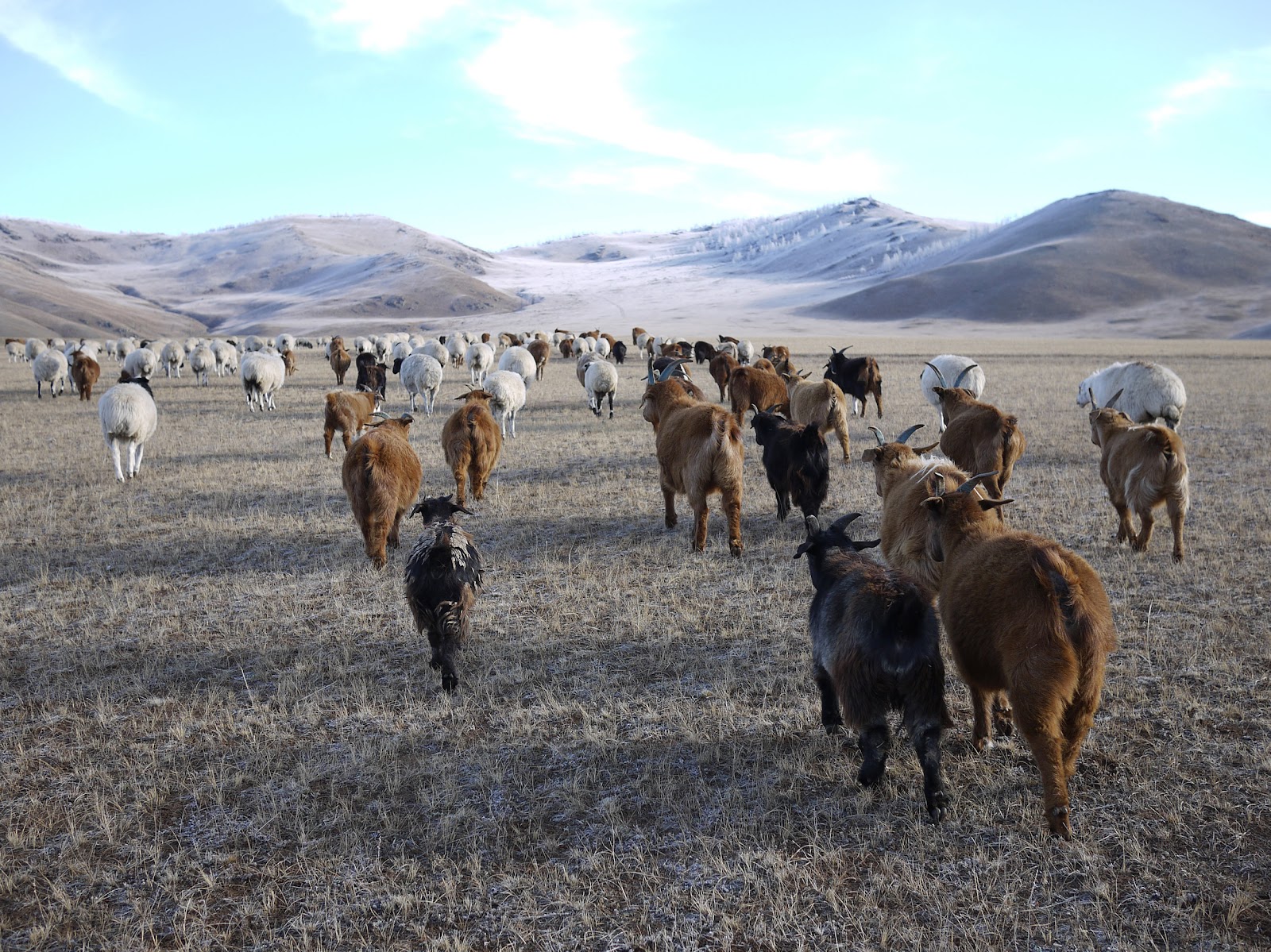 Goats are also exploited for their fibre around the world. This industry devastates the environment in which these animals are raised and consequently the people who farm them suffer too. If you would like to learn about the cashmere industry, you can do so here.

Animal agriculture is an inefficient system, requiring more resources than it produces. This causes devastation to the environment as the more resources humans ‘require’, the more land will be cleared for the purpose of growing and producing them. Loss of biodiversity is a significant issue, which often leads to species extinction, releasing of greenhouse gas emissions and other environmental catastrophes.

Goats are ruminant animals, which means that the manure that they produce emits methane. Methane is a powerful greenhouse gas emission that has a global warming potential 30 times more potent than CO2 as a heat trapping gas. A study found that for every 1 kilogram of fat- and protein- corrected milk, 1.03kg of CO2 equivalent emissions are emitted.

Health implications due to dairy promotion

People have long been bombarded with advertising campaigns promoting dairy as a healthy source of calcium for people. Aside from this being false, many marginalised groups of people suffer from lactose intolerance. This widespread, continuous promotion of dairy as a food with health benefits has disproportionate health impacts on people from African and Asian communities.

Research has documented the adverse effects that working in a slaughterhouse can have on a person, in some cases even causing PITS – perpetration-induced traumatic stress. This disorder is associated with the suffering one experiences due to committing violent acts. Undoubtedly being involved in such acts has the potential to change a person’s thoughts, behaviour and feelings.

This amazing product is made from macadamia nuts, meaning no goats were harmed in it’s production. This delicious feta cheese is also cheaper than the goat dairy equivalent. You won’t be compromising on taste with this feta, try it and we are certain you will love it.

This feta cheese is available at major supermarkets in Australia, it is delicious and creamy, perfect to add to salads and only $1 more than the dairy equivalent, a tiny price to pay to ensure no goats were harmed in the production process.

You don’t need goat’s milk in your soap to take care of your skin. There is a huge range of amazing soaps on the market that are both gentle on your skin and ensure no goats had to die.

Almost any fancy cheese you can think of has a vegan alternative that tastes amazing. The Vegan Dairy is an amazing company with a huge range of kind cheese alternatives.

There is a huge range of vegan body lotions and washes that are kinder to our animal friends. Sukin is an all vegan brand available in supermarkets, chemists and online.

There is a huge range of shaving creams that do not test on animals or include goat milk in their formula. Baby goats don’t need to die for anyone to shave! Add a cruelty free alternative to your shopping list!

Some other available alternatives:

Goat’s milk is made for baby goats, not baby humans. For parents who want/need to feed their babies formula, there are a variety of vegan options available that are great for human babies and do not harm goat babies.

There are a plethora of vegan milk alternatives available in major supermarkets, that are better for our health, the planet, the animals and taste great.

There are some great alternatives for halloumi on the market – Bio Cheese halloumi can be found in major supermarkets around Australia. Hello Friend Foods also make a vegan halloumi, which is an absolute favourite of ours!