Sheep are gentle creatures, with excellent memories and tight knit social structures. Studies have shown that sheep are able to feel a range of different emotions, just like dogs and cats do. They also possess the ability to recognise up to 50 individual faces for up to two years, a similar capacity to humans. Sheep are often thought to lack individuality or autonomy, painted as mindless followers of their flock. This misconception is damaging and simply untrue, and is likely due to the lack of time most people spend with them.

Sheep can live up to 12 years naturally, however, in the animal agriculture industry they are killed at a fraction of this; 6-9 months old.

Every year 10-15 million lambs die in the first 48 hours of life, mostly due to starvation, neglect and exposure. 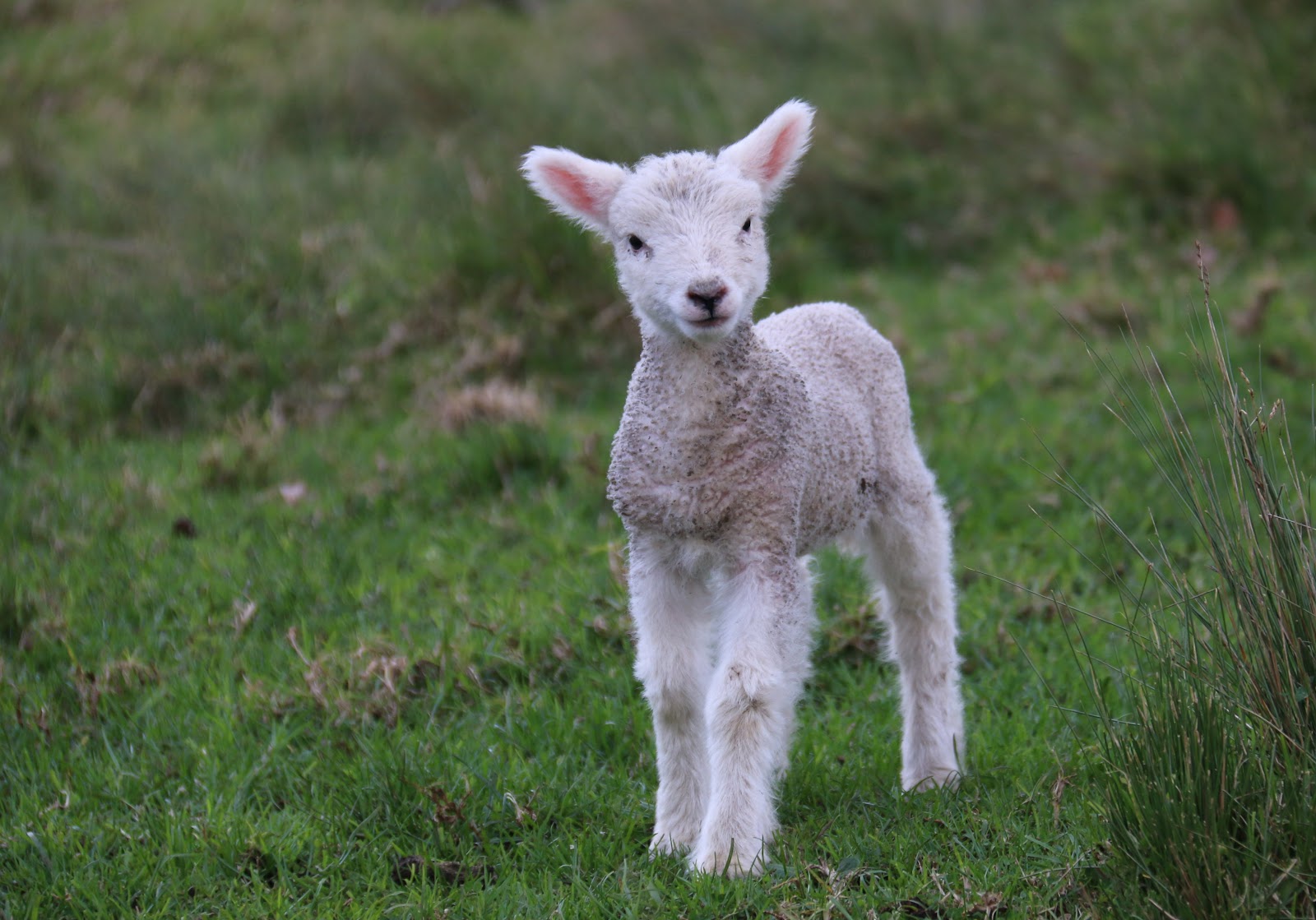 Ewes (female sheep) are impregnated to give birth in the winter months. This is known as winter lambing, and is done so that lambs are weaned by springtime when the pastures are most fertile, offsetting feed costs. The consequence of this standard industry practice is that many lambs perish in the harsh conditions of winter.

Hypothermia is a common cause of death in newborn lambs, who are often not provided adequate shelter or other protection from the elements. 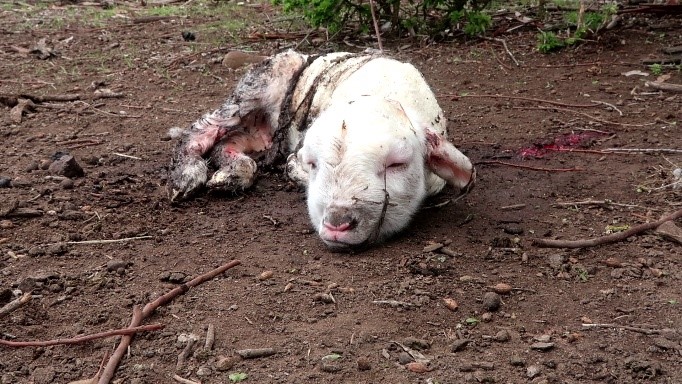 An orphaned newborn lamb. Luckily, they were rescued and are now living happily at a sanctuary.

Years of selective breeding and manipulation has seen ewes regularly giving birth to twins and triplets. Lambs born as a twin or triplet are often smaller and weaker, making them more vulnerable to the effects of hypothermia.

Ewes carrying twins and triplets are more likely to die than those giving birth to one lamb. They are also more likely to become downed, making them extremely vulnerable to predation and prolapse.

Years of selective breeding and genetic manipulation has led to sheep needing to be shorn. Investigations by PETA have continually revealed the violent reality of the shearing industry, with sheep often being kicked, beaten and thrown around.

Shearers are most commonly paid by how many sheep they have shorn, not by hour, giving an incentive to shear sheep faster, ultimately resulting in rougher handling.

Learn more about the wool industry and its harmful impacts here.

Sheep are forced to endure several painful standard practices in the meat and wool industry. Mulesing is the most widely scrutinised of these practices, which is the process of cutting the skin from a sheep’s buttocks with metal shears. In most states of Australia, mulesing can legally be performed on lambs under the age of 6 months without the use of any pain relief. 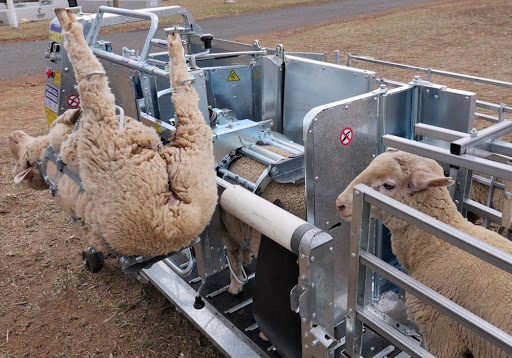 Mulesing is performed under the guise of preventing fly strike, which is when flies lay their eggs on sheep’s skin, soiled wool or open wounds. When the eggs hatch maggots burrow into the skin of the sheep, using their flesh as a food source.

Fly strike can be prevented by regular crutching, which is the shearing of the wool around sheeps’ buttocks, between their legs and their tails for hygiene. This process is more time consuming and costly, so is seen as unfavourable to an industry whose interest is maximizing profit.

It is easy to forget that sheep are actually born with tails, because in the meat and wool industries it is standard practice to remove them. Their tails serve a purpose to them, like other animals, as they can be used to swat flies away and protect body parts from weather extremities. Unfortunately, due to selective breeding, sheeps’ tails now hold so much wool; without ongoing crutching they can become the perfect environment for maggots, soaked with urine and faeces.

The codes of practice outline that lambs under the age of 6 months can have their tails docked without the use of anaesthetic, with the industry recommending between 2 and 12 weeks as the ideal time. 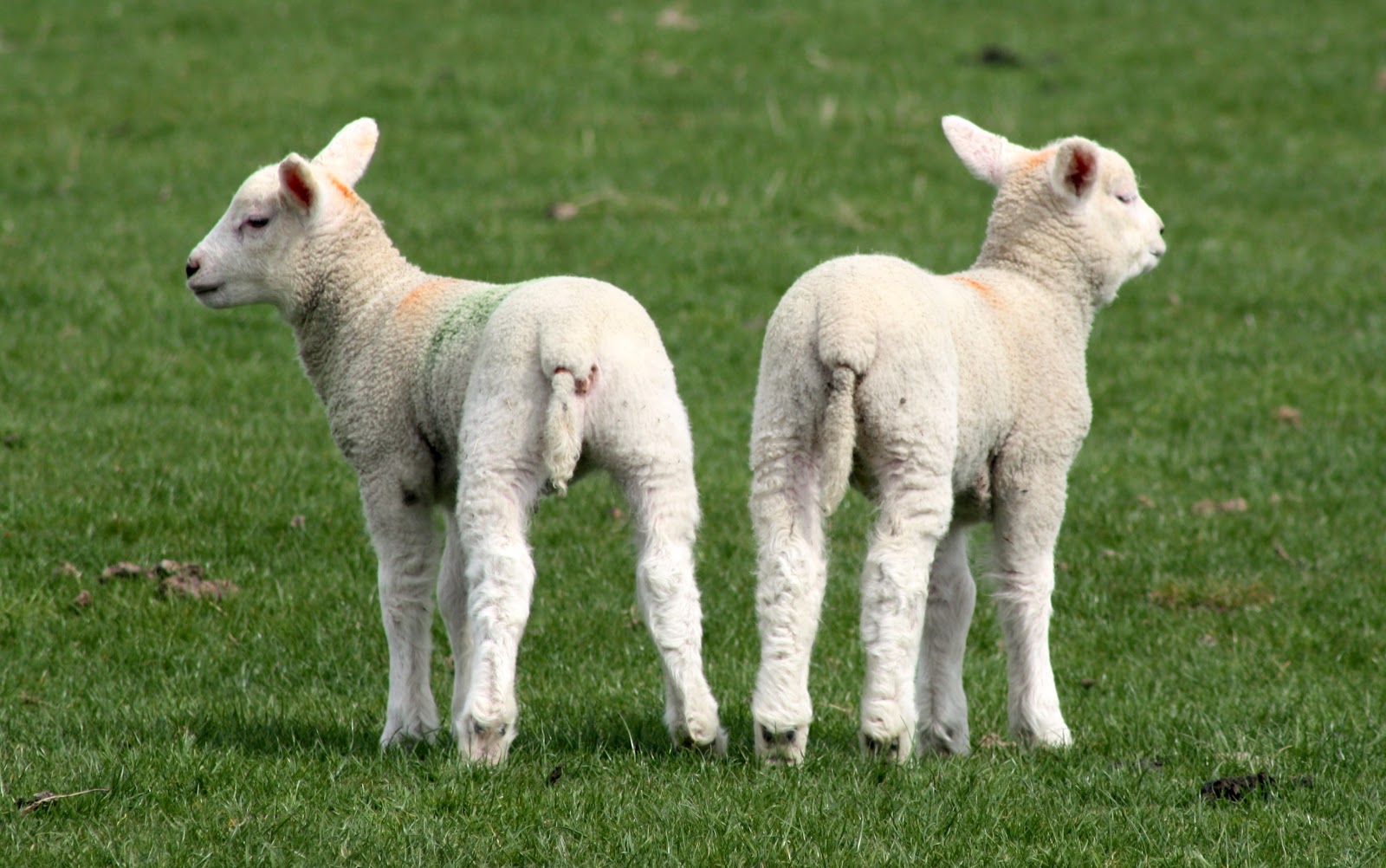 Two lambs having their tails docked by band method.

There are 3 methods where lambs’ tails are painfully removed: heat scarring iron, band and knife. Heat scarring uses a scarring iron to sear the lambs’ tails off, whilst they are restrained and unable to escape. The band method involves forcing a band around a lamb’s tail to cut off their circulation, slowly killing the nerves and flesh until the tail drops off. The knife method is when a knife is used to cut away the flesh and through the bone of a lamb’s tail.

Each one of these methods has been proven to be terribly painful for lambs. 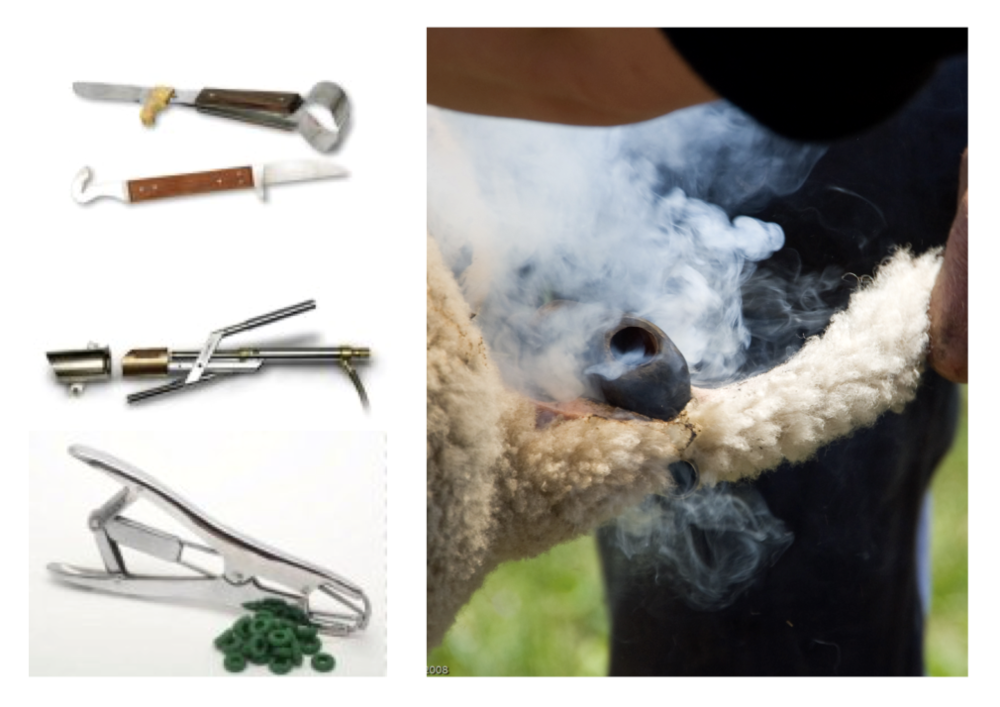 Most male lambs are castrated to give farmers significant control over the breeding of their flocks; only the most ‘desirable’ males are kept entire for breeding. Industry standards again mandate that this genital mutilation can occur without any pain relief, using a band or a knife.

Like cattle, sheep are often sent to large, barren, enclosed areas to be ‘finished’ with grain; these are known as feedlots. On feedlots sheep are kept in horrible conditions, often suffering health complications caused by a heavy grain diet and constant confinement. 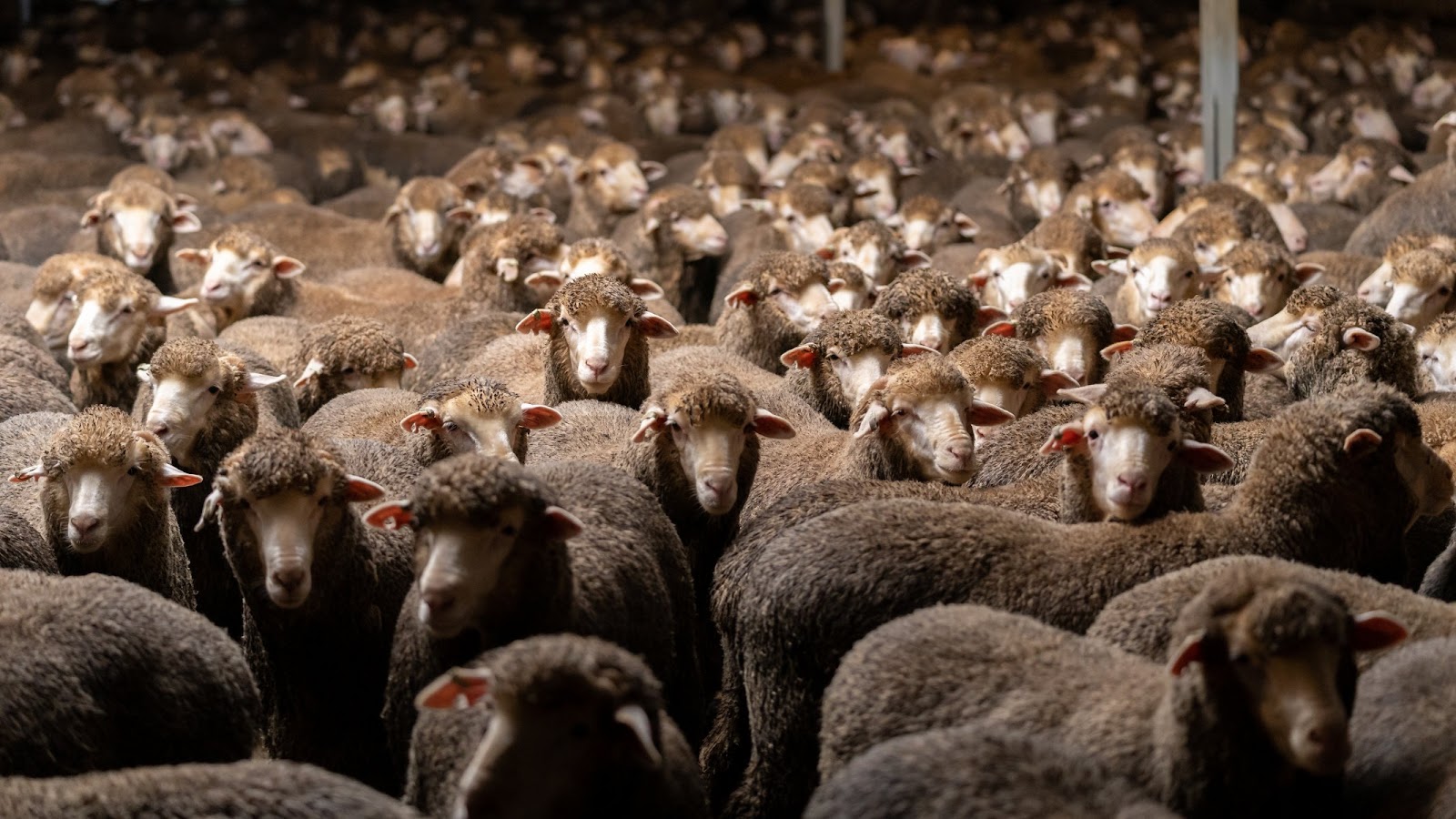 Many sheep that are bred in Australia are exported alive, often to countries that afford animals even fewer protections than Australia. According to government reports 1,259,860 sheep were exported live to be slaughtered overseas in 2018, 6,629 of whom died during transit. 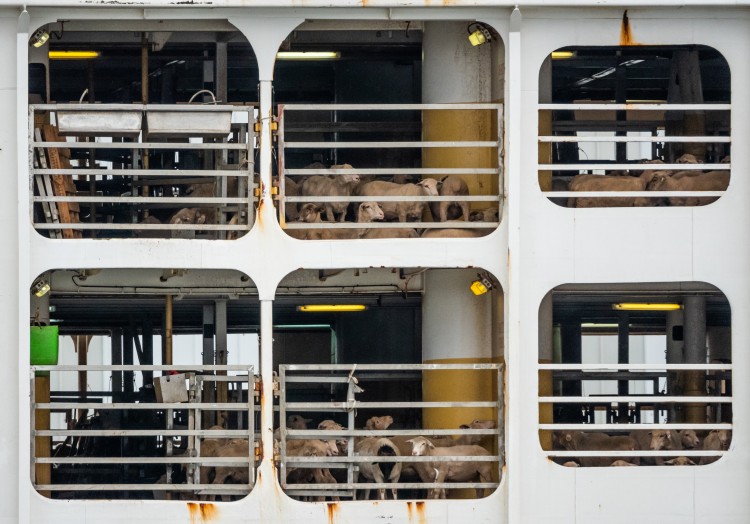 Investigations have revealed that conditions aboard live export ships are appalling; animals live in built up waste and are often not provided with adequate food or water.

Globally more than 500 million sheep are slaughtered for their flesh each year. In most Western standards, legal practice means sheep are required to be stunned prior to slaughter, either electrically or with a captive bolt pistol which pierces their brain. Following stunning, sheep are killed by having their throats cut open and are bled out. 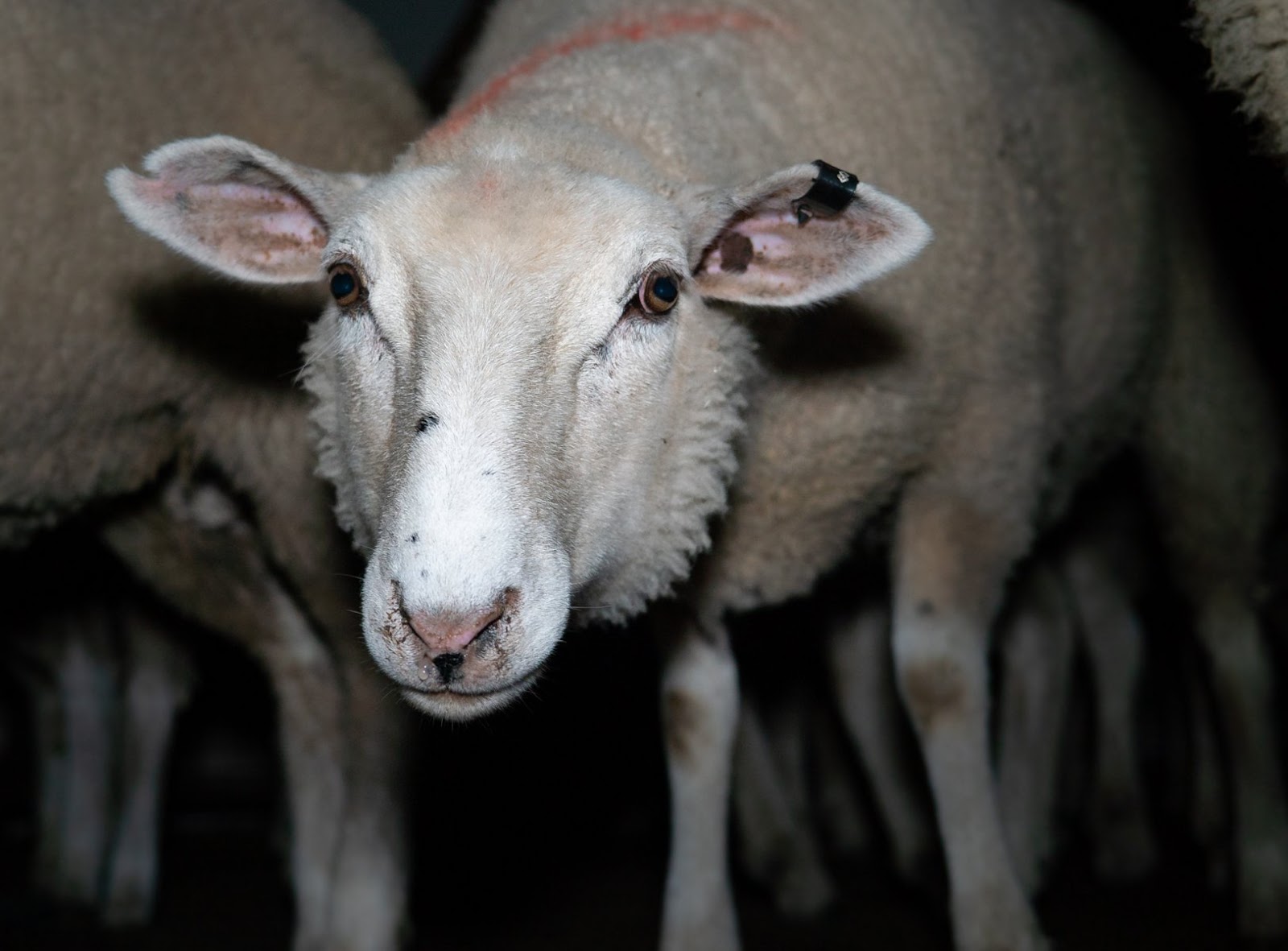 A sheep in the holding pens of an abattoir. Image: Farm Transparency Project.

Ineffective stunning is not uncommon in Australian slaughterhouses. Electrical stunning, in particular, does not render an animal permanently unconscious; they regain consciousness after several minutes, and if they are not bled out in this time they will be conscious during slaughter 1,2.

Sheep are ruminant animals, meaning their body digests food in a way dissimilar to humans and many other species. The primary source of farmed animal methane is ruminant animals. Methane is a greenhouse gas (GHG) emission that can be released from sheep manure, which is particularly problematic as it is 30 times more potent than CO2 emissions.

Animal agriculture is one of the largest contributors of GHG emissions, third only to the energy and transport sectors. For methane in particular, cattle and sheep account for 56% of all Australian emissions.

92% of land degradation in Australia can be attributed to animal agriculture. More specifically, 55% of land is used for farm animal grazing of sheep and cattle.

Moreover, sheep are hooved animals and not native to Australia; their occupation in Australia has devastating impacts on the land in many ways, including through soil erosion and desertification. Desertification is disastrous for the environment and the native animals and plants that inhabit it.

Eutrophication is when a body of water becomes over-enriched with nutrients and minerals.

Consequently, this causes excess algae blooms and can lead to a lack of oxygen in the water. As a result, marine and plant life cannot survive. These affected bodies of water are known as ‘dead-zones’.

Sheep faeces contain a mineral known as phosphorus, which is the primary cause of eutrophication in freshwater. Consequently, diffuse pollution occurs, which is the release of pollutants that on a small scale may have little impact on waterways, however at a large scale can have a huge detrimental effect, even endangering entire waterways.

Reports in Australia have suggested that the conditions in which shearers are made to work are often unsafe or inadequate, with many lacking a bathroom, fresh running water or correct safety equipment for workers. Some contractors have even claimed to have been paid for work in drugs.

To learn more about the wool industry click here. 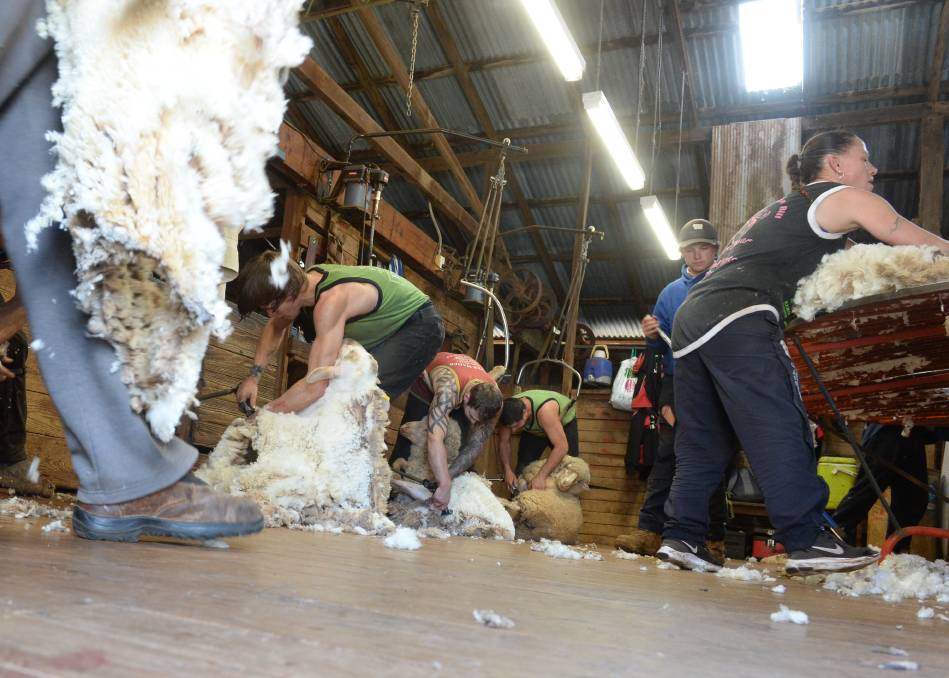 Meatpacking has been identified by Human Rights Watch as one of the most dangerous factory jobs in the US, with the rate of injury more than double the national average.

Research has also highlighted the devastating mental health impacts working in abattoirs can have on a person. Workers often experience a form of post traumatic stress disorder known as PITS, or perpetrator-induced stress disorder, which refers to the trauma associated with inflicting repeated acts of violence. Sufferers of PITS can experience depression, panic, paranoia and dissociation.

Studies have also indicated that rates of violent crimes (including sexual and domestic violence) are higher in areas surrounding abattoirs. It is postulated that this is linked to the inherent violence of the workplace, and the poor mental health of the workers.

Often abattoir workers are immigrants or resettled refugees, who otherwise have little or no other options for work. Consequently, they are forced to take jobs in an industry that is incredibly dangerous to them, both physically and mentally.

To learn more about the human related impacts of the animal industrial complex, click here.