Turkeys are playful, affectionate and social birds, who form strong bonds with each other. They have a well developed vocalisation system, able to recognise each other’s calls and produce a large variety of vocalisations. Turkeys have the ability to remember an area of up to 1,000 acres, exploring far and wide when given the opportunity. Turkeys are exploited for their flesh around the world, commonly viewed as an animal to be eaten on Christmas or Thanksgiving. Anyone who has spent time in the presence of these magnificent creatures can attest to their quirky and sweet nature.

Turkeys exploited for their meat have been genetically manipulated through years of selective breeding to grow nearly double the size of turkeys in the 1960s. Consequently, turkeys are no longer able to breed naturally, and artificial breeding is standard practice throughout the industry.

To collect semen from a tom (male turkey), he is restrained so he is unable to escape, and then an operator masturbates his cloaca until he involuntarily ejaculates.

The semen is then forced into the hen; she is restrained, pressure is applied to her abdomen, which exposes her vaginal orifice through the cloaca, and the semen is then injected into her using a straw, syringe or plastic tube.

The production period of hens is usually from 18-23 weeks to 60-65 weeks of age; throughout this time they are forced to endure this process weekly. Once their productivity slows and their ‘economic viability’ diminishes, they are slaughtered and replaced with a new breeder flock. Once female turkeys lay their eggs, they are taken away from them to be incubated under artificial conditions in a hatchery.

Once turkey chicks are hatched, they are sorted and undergo several painful mutilations, including debeaking and toe trimming. 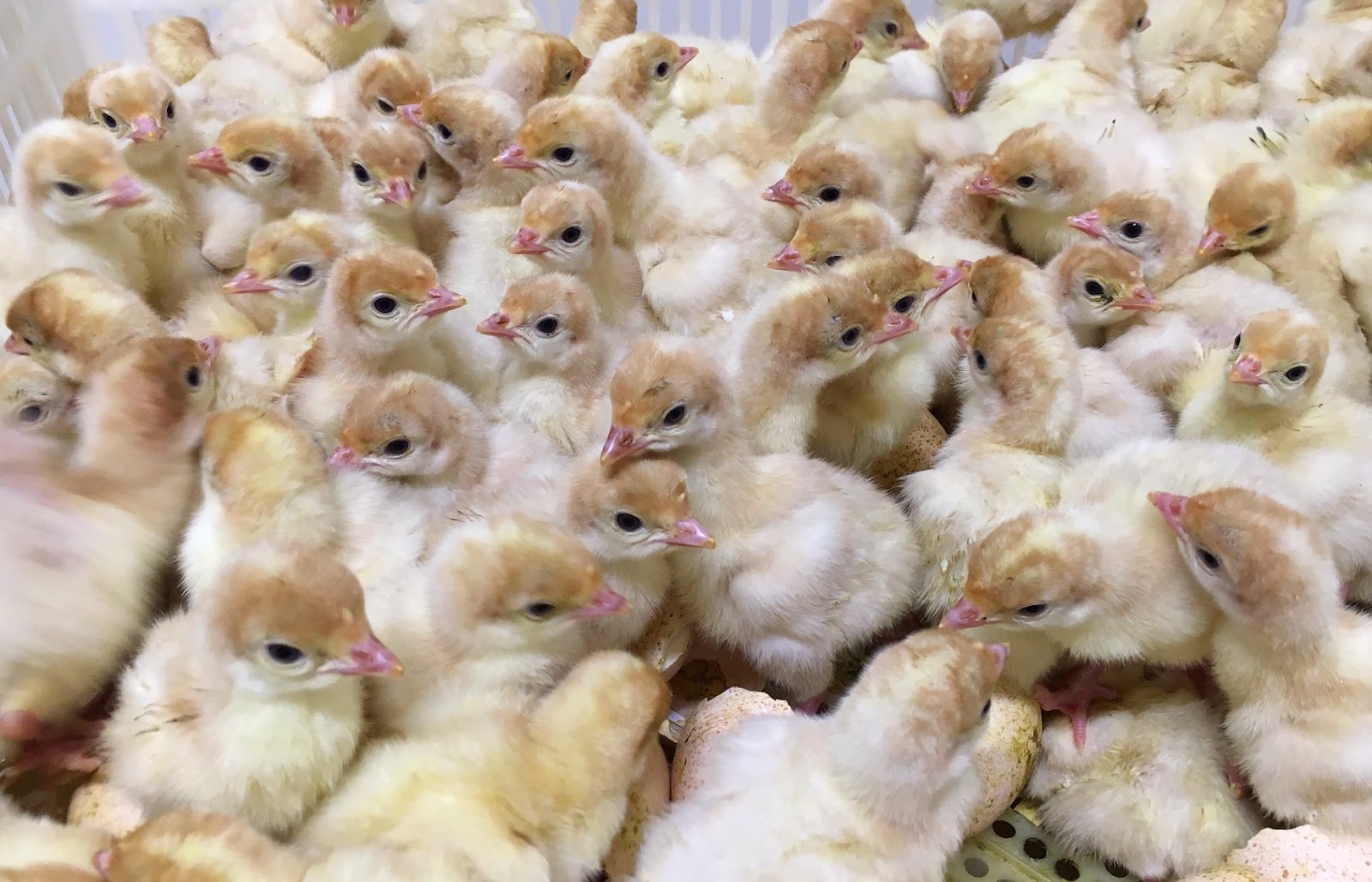 Debeaking is the abhorrent practice of removing the end of a bird’s beak. This is done so turkeys cannot ‘damage’ one another, which ultimately depletes the carcass quality. Peck injury and cannibalism is common among turkey flocks who are forced to live in extreme confinement, and is indicative of stress and frustration caused by their living conditions. 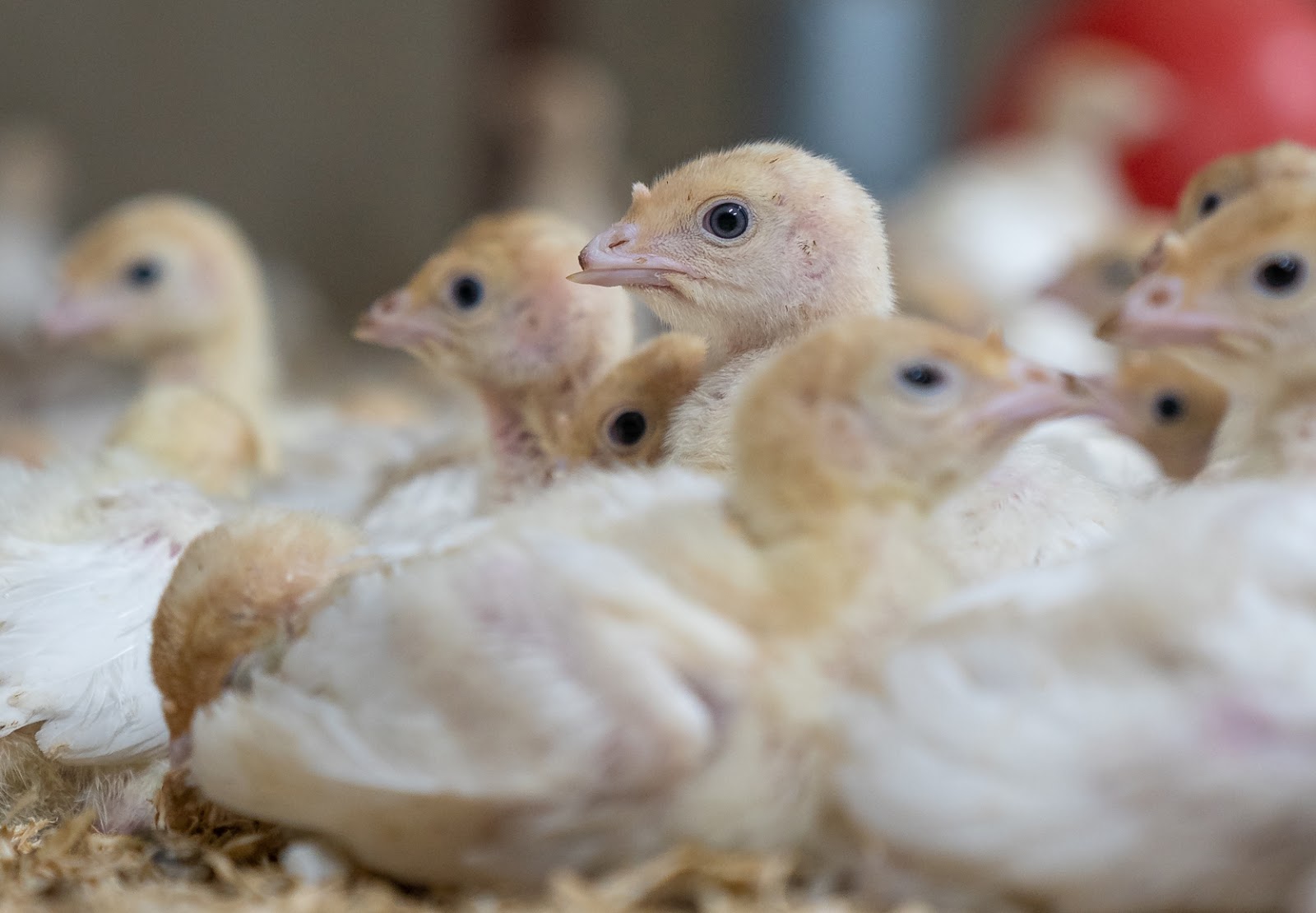 Turkey chick that has been debeaked. Image: Farm Transparency Project.

There are two common methods used to remove turkeys beaks – hot blade trimming and infrared debeaking. Infrared debeaking is the application of an infrared laser to the tip of the beak, damaging the tissue so that the tip of the beak erodes and eventually falls off. Turkeys are usually restrained by their head on a carousel that automatically applies the infrared energy. Hot blade trimming is when a heated blade is used to cut off the end of turkeys’ beaks.

Turkeys have nociceptors – pain receptors on the ends of nerve cells – in the tips of their beaks, meaning the removal of the end of their beak is extremely painful for them.

Toe trimming is the painful removal of the end of turkeys’ toes in order to prevent their claws from growing. This is done by applying microwave energy to the toes of poults, killing the germinal bed tissue from which claws grow. The practice is often justified by the industry as a way to prevent birds injuring one another, however if their wellbeing was a priority, they wouldn’t be put in a situation where a procedure of this nature is made necessary. Ultimately producers don’t want to compromise on quantity, and also don’t want the final product, their carcass, damaged.

During the declawing process, turkeys are restrained by their feet by an industrial machine that pulls them at a high speed, applying the microwave energy to their feet before dropping them at the bottom.

Turkeys that have their toes removed have been observed to exhibit a number of behaviours associated with pain, including increased resting, sitting and reduced eating (a strong indicator of pain). 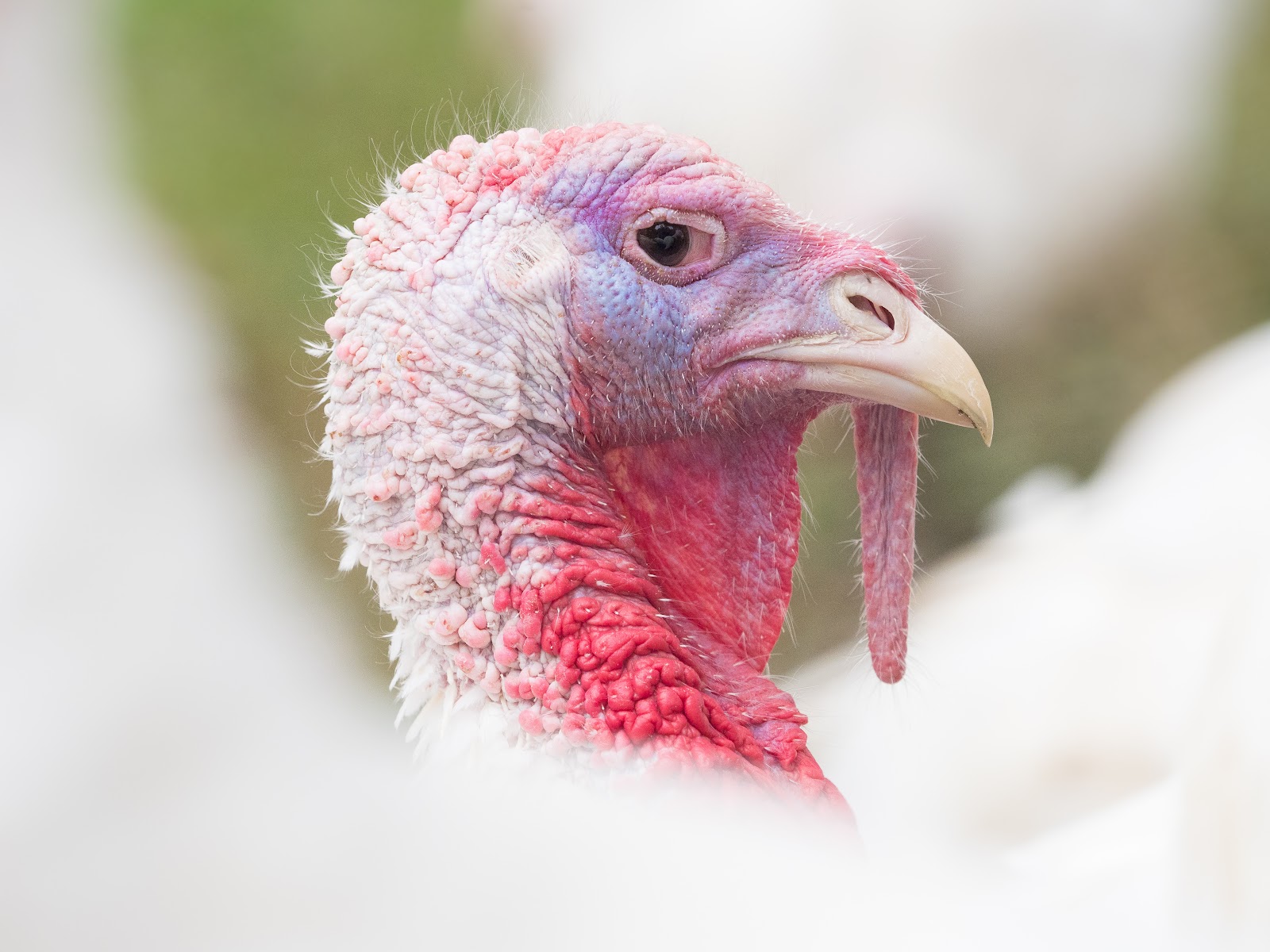 Turkey with a long snood.

It is also legal to desnood turkeys, which is the removal of the fleshy appendage on top of male turkeys’ heads, considered to be a target for pecking behaviour. Further, it is legally acceptable to de-wing turkeys, which is the trimming of their primary flight feathers, minimising their ability to express flight behaviours that come naturally to them.

Once turkeys undergo these horrific mutilations, they are sorted by sex and boxed up to send out to farms.

Codes of practice outline that in intensive farming systems for every metre squared of space, 46kg equivalent of turkeys can be housed. Essentially, this means that up to 14,000 turkeys can be crowded in just one standard shed.

The sheds turkeys are housed in are barren and lack any genuine enrichment. Studies have indicated that this lack of stimulation in their environment is responsible for aggressive behaviours and cannibalism. Living in unnaturally large flock sizes makes it impossible for turkeys to establish their pecking order, which is incredibly stressful for them.

Turkeys are forced to live on the same litter for the entirety of their lives, consequently they spend most of their life on wet, soiled litter. Turkeys’ urine produces ammonia, a colourless gas with a strong odor, and living on this soiled litter frequently leads to a number of health complications, including footpad dermatitis and respiratory issues.

Footpad dermatitis is a painful condition in which turkeys’ feet become swollen and cracked, often caused by the wet litter turkeys are forced to live on. Statistics suggest that up to 48% of female and 46% of male flocks suffer from this condition. It has even been suggested that it may be impossible for intensively farmed flocks to have low prevalence of FPD.

Due to the selective breeding of turkeys to grow at such a rapid and unnatural rate, their internal organs (like heart and lungs) can lack the ability to meet the demands of their metabolism; this condition is known as ascites. Ascites is the accumulation of fluid in their abdominal cavity due to inefficient pumping of the heart, and can cause them to die suddenly. 30% of poultry mortality can be attributed to this metabolic disease.

There are two common ways turkeys are killed – bleeding cones and shackle lines. A bleeding cone is a funnel shaped apparatus in which a turkey is forced into upside down, their head and neck exposed at the bottom whilst their body is restrained. They are then decapitated and bled out in the cone; no stunning is required for this method. 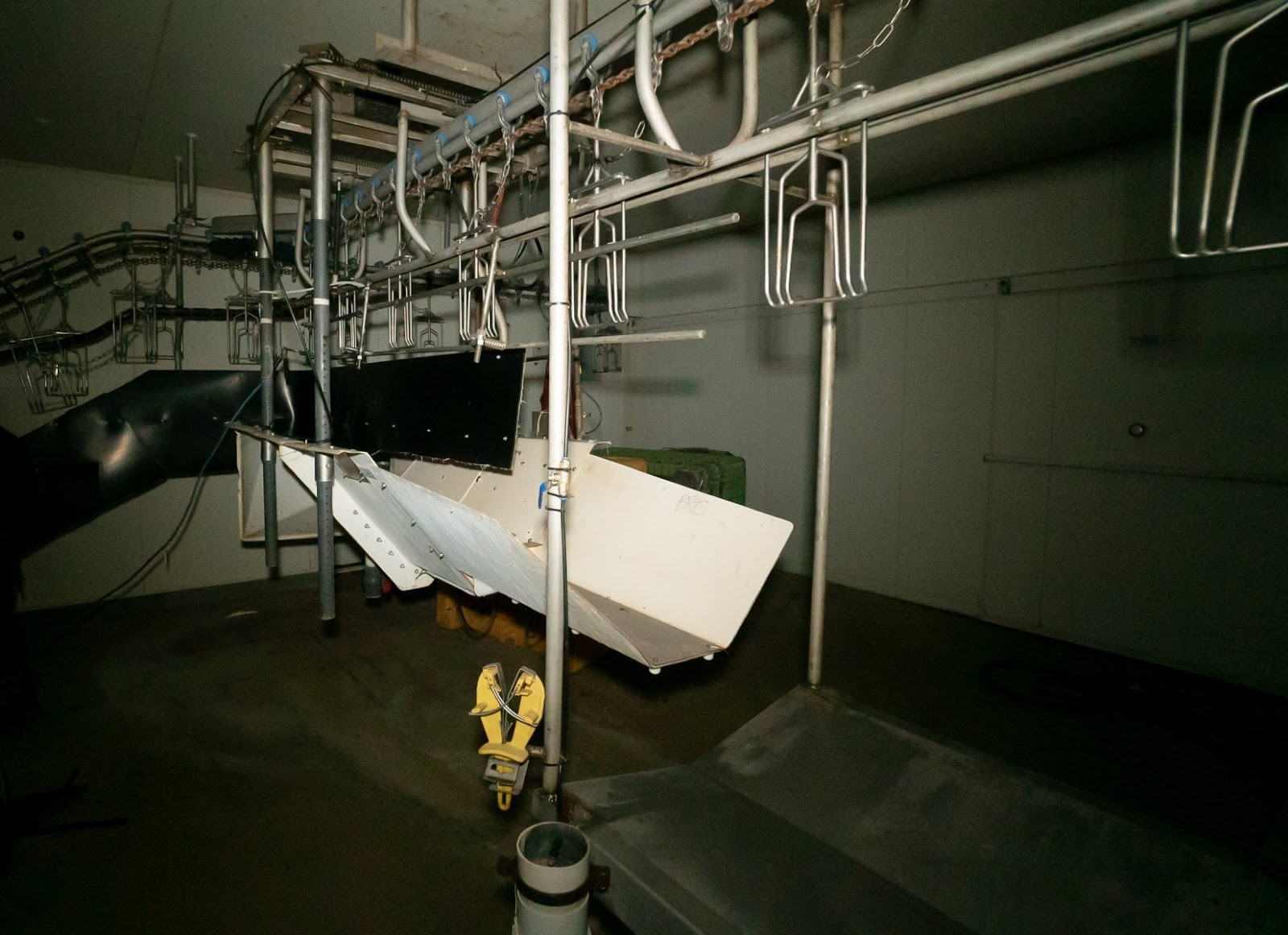 Birds killed on a shackle line are hung upside down, their heads dragged through an electrified body of water, rendering them unconscious before their throats are cut. It is common for turkeys on the shackle line to lift their heads, missing the stun bath, and therefore they are killed whilst still completely conscious. 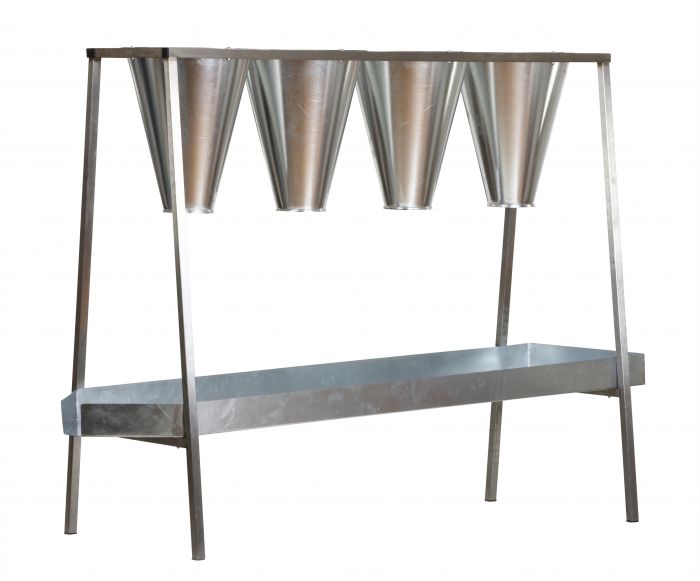 The global warming potential of the poultry sector is mainly due to this feed production. This is because some feed ingredients used for poultry, particularly soybean and palm oil, are grown on newly deforested land, particularly in South-America and South-East Asia.

Trees play an essential role in capturing and storing greenhouse gas (GHG) emissions, such as carbon dioxide (CO2), stopping them from accumulating in the atmosphere and heating the planet. When trees are destroyed, they release the CO2 they have been storing into the atmosphere, emitting huge amounts of carbon dioxide and removing a valuable tool in helping slow climate change.

A massive 70-75% of worldwide soy is grown to be fed to livestock. Comparatively, only 6% is turned into products directly eaten by humans. A huge 75% of the soy fed to livestock was accounted for by the poultry sector in 2004. In the midst of an environmental crisis, and the Amazon rainforest practically disappearing before our eyes, it is essential that we consider that Land clearing for cattle ranching, as well as soy, is one of the greatest threats facing the Amazon today.

The clearing of the precious Amazon rainforest is devastating to not only native flora and fauna, but the Indigenous people of the Amazon. Huge losses in biodiversity have already occurred and will continue to do so if deforestation is not halted.

A massive 40% of global fishmeal is said to be fed to livestock, of which 13% is fed to poultry. One of the biggest threats facing our oceans is overfishing, which poses a huge threat to ocean biodiversity. 77% of global fisheries are fully-exploited or on the verge of collapse. Overfishing not only threatens populations of target species, but disrupts the entire marine ecosystem. As well as removing a valuable food source for many species, it is estimated that 20 million individuals each year caught by fishing vessels are non-target species, written off as ‘by-catch’. Dolphins, sharks, sea turtles, and seabirds are some of the worst affected by this.

Water pollution is another concern relating to the poultry industry. Between 50-80% of the nitrogen poultry consume is excreted. Leaching and run-off of nitrogen has the potential to contaminate ground and surface water. When a body of water becomes over-enriched with minerals, like nitrogen, algae blooms and depletion of oxygen occurs, consequently killing marine life; this is known as eutrophication. Eutrophication is the cause of more than 400 oceanic dead zones around the world.

The Mental and Physical Impacts for Workers

Slaughtering animals, without a survival imperative, is a wholly unnatural thing for people to do, so much so that it has the ability to adversely affect the mental health of those who work within the animal industrial complex.

Research has indicated that prolonged exposure to violence in abattoirs has the potential to cause immense psychological damage upon a person. Levels of aggression among meat workers have found to be similar to that of incarcerated populations.Workers are even known to experience a type of post traumatic stress disorder known as Perpetrator-Induced Traumatic Stress, or PITS. Sufferers frequently experience symptoms of paranoia, depression, dissociation and panic.

Further, slaughterhouse workers are often immigrants or resettled refugees, who have limited options for work. Essentially, their vulnerable situations are exploited and they often end up working a job that most people don’t want to do, which can severely damage their mental and physical health.

The Prevalence of Factory Farms and Feedlots in Marginalised Communities

The health of communities local to intensive animal farms is often impacted by their presence. Residents are frequently exposed to hazardous materials and airborne particulate matter. Feedlots and factory farms are disproportionately placed in low-income and/or predominantly non-white communities. These communities often suffer the brunt of the health issues presented by living in such close proximity to these operations, whilst concurrently having inequitable access to health care and support. The presence of these farms in these communities perpetuates racial and economic injustices, and therefore amounts to environmental racism.

Tofurky is revolutionary in the way they are able to so accurately mimic the taste of traditional meat products, without harming any animals. You can keep the post-Christmas refrigerator raid going all year long with these deli slices. Perfect in a sandwich, a toastie, or straight from the packet. Why would we harm animals with alternatives this good!?

If missing out on roast turkey is your worry, never fear! There is a huge range of plant-based roasts sure to satisfy even the fussiest of eaters. Vegie delight’s roast is the perfect substitute for your sunday roast.