The beauty and cosmetics industry unfortunately has a hideous dark side to it, with skincare, makeup, shampoo, body and dental hygiene products too often needlessly harming and killing animals. Cosmetics are sometimes still tested on animals, who are subjected to awful procedures where they are injected with substances that cause skin irritation and breakdown. Their eyes are exposed to chemicals that burn and blind them, and they are fed substances that kill them, often experiencing diarrhea, convulsions, seizures and paralysis first. These tests are not only completely unnecessary, but as we will see, they are simply not effective science, according to the data.

The animal suffering caused by the beauty and cosmetics industry doesn’t stop with animal testing. Unless vegan certified, many of these products contain animal derived ingredients. For example, glycerin and tallow are often derived from animal fat, lanolin from sheep in the wool industry, and guanine from slaughtered fish.

No animal deserves to suffer and die for cosmetics, and luckily, there are thousands of beautiful products we can use that are not tested on animals, and which do not contain any animal based ingredients.

The Legality of Animal Testing for Cosmetics

In Australia, cosmetics are considered to be anything that are designed to be used on external body parts or inside the mouth in order to change an appearance or odour, clean, keep in good condition, or protect it. This includes products like mascara, concealer, eyeshadow, lipstick and lip balm, nail polish and varnish, face masks, moisturiser, lotion, gel, deodorant, perfume, shaving products, toothpaste, shampoo, hair conditioner and hair dyes.

While practically every known ingredient in the world has been tested on animals at some stage, today animal testing occurs when brands do not want to use the over 20,000 chemicals and ingredients already known to be safe and effective for humans. 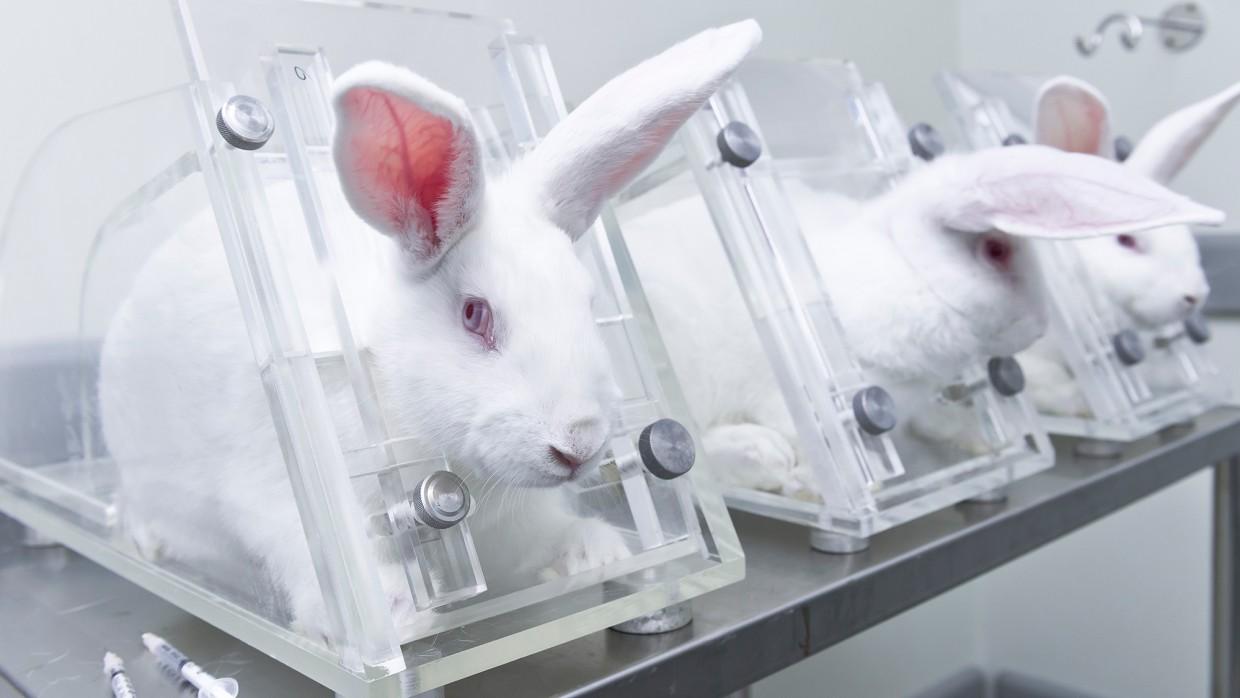 Confined rabbits being exploited and harmed for cosmetics testing.

Across the world, animal testing for a variety of reasons is still extremely common. In the cosmetics industry, animal testing is less common than it used to be, and in many cases no longer legal. Cosmetics testing is now banned in 40 countries across the world. In Australia, the Industrial Chemicals Act 2019 may at first seem like a total ‘cosmetics testing ban’, however there are many loopholes in this legislation.

Unfortunately, another loophole allows the importation of cosmetic products that have been tested on animals. When shopping in Australia, the only way to know that products have not been tested on animals is to ensure that they are certified by an exhaustive animal protection body like Choose Cruelty Free, who consider not only whether the final product was tested on animals, but also if each chemical, dye or other ingredient was.

Types of Tests Done on Animals

There are many different tests done on animals for the sake of cosmetics. Some of the most common are as below:

After animals are used for testing, if they have not died during their horrific treatment, they are killed, no longer considered of use. Often the smaller animals used in cosmetic and other testing are gassed to death and incinerated.

Some products are labelled ‘cruelty-free’ if they are not tested on animals, however this can be very misleading.

This is because unless a product is vegan, and so does not contain any animal derived ingredients either, there is animal cruelty involved in the creation of the product.

It’s important to understand that just because the body parts used to create these ingredients are not the primary reason animals are slaughtered, buying products that have these ingredients in them still funds a slaughtering industry. No part of an animal’s body is given away freely, but sold. Anything made from animals sent to slaughterhouses financially supports this slaughter system, and the wider enterprise they represent. A ‘by-product’ becomes a ‘co-product’ when it is profitable.

Ingredients Obtained from some of the most Environmentally Destructive Industries

As we’ve seen, animals like sheep, cattle, pigs and fish, and parts of their carcasses, are used for ingredients in cosmetics.

The industries that exploit and kill these animals also cause devastating damage to the environment in the process.

The pigs who are slaughtered for their flesh, who have some parts of their bodies used for the cosmetic ingredient ‘glycerine’, live, in most cases, on factory-farms.

These factory-farms cause enormous damage to the environment. The manure from pigs confined to factory-farms has phosphorus and nitrogen in it, and at such a large scale, when this manure contaminates environments outside of the farm, it can be extremely damaging.
Run-off contamination from waste pits at factory-farms causes eutrophication, where water becomes overly enriched with minerals and nutrients. Due to this, excessive algae growth occurs, often resulting in oxygen depletion in the water. In turn, this kills fish and other aquatic life, both plant and animal. Areas where this occurs are called ‘dead zones’.

The cattle exploited and killed for their flesh, skin and milk also have cosmetic ingredients, including tallow, made from their carcasses. These industries are always harmful to the environment, because so many cattle are bred for this purpose, and cattle release huge amounts of greenhouse gas emissions.
In fact, 14.5% of all human-related greenhouse gas emissions (think mining emission release, transport fuel exhaust) come from farmed animals, with 65% of these emissions caused by cattle specifically.

As with all the other industries mentioned, sheep farming for flesh, skin and wool, as well as for lanolin used in cosmetics, is detrimental to the environment.
Did you know that more native Australian land is cleared for animal grazing than any other industry? In fact, 88% of all agricultural land in Australia is used for grazing. 36% of this land disturbance is specifically used for the farming of sheep for meat and wool.

Fish killed for food, and to be used in oils and for ingredients like guanine, are slaughtered by the billions every year. This comes with enormous, negative implications for the environment, and of course the fish who suffer and lose their lives.

70% of Earth is covered by ocean. If we did have a future of fishless or practically fishless oceans – which is predicted – the entire ocean ecosystem could fall apart. If we made fish extinct, species that rely on their existence for food would also die out. Without all these species creating the symbiosis that is nature, algae, kelp, plankton, krill and worms would seriously struggle, too. The environmental implications of this are unfathomable.

The mental health implications of working in animal testing could be severe.
They All Had Eyes: Confessions of a Vivisector shares the experiences that author Michael Slusher, now a vegan animal advocate, had while testing and experimenting on animals. The book includes extremely graphic details of the horrors of animal testing, and the way Slusher had to close himself off to the animals, even ignore his discomfort to the sadness and fear he saw in them.

Slusher has talked about feeling like he had Post Traumatic Stress Disorder-like symptoms, and having depressed feelings when thinking back on what he had done in the past.

Slusher’s book opens with a dedication; ‘to the many animals whom I tortured and killed in the name of science. If there is a hell, I will spend it forever looking into their eyes.’

It is hard for any of us to imagine the immense toll this sort of violent work would take on a person. We must consider, if we could not psychologically cope with a job, why should we expect other people to for the sake of our want for cosmetics?

The issue with calling cosmetics ‘cruelty-free’ doesn’t end with the treatment and killing of animals. There are lots of human health and wellbeing implications involved in cosmetic supply chains.

Some of these issues don’t relate to animals at all. For example, mica is a sparkly mineral used in a lot of cosmetics. Mica is linked to high rates of child labour in mining for it. Children as young as five have been documented in these mines.

Some of these supply chain human rights violations do relate to the animal ingredients used, though. For example, the aforementioned ‘guanine’ cosmetic ingredient from fish scales could be linked to modern day slavery at sea. Human trafficking for the fishing industry is reported to be a serious problem in some parts of the world. These workers are forced into horrific conditions; 59% of trafficked migrants aboard Thai vessels have reported witnessing a murder of a fellow worker.

In abattoirs that kill sheep, cattle and pigs, whose carcasses are used for cosmetics’ ingredients, workers are often put at risk, too. Compared to the general population, abattoir workers experience higher rates of serious occupational injuries, and serious psychological distress.

The people working in these industries that harm animals are being exploited by those running them, who profit from the suffering and slaughter of animals, environmental destruction, and the suffering of human workers.

Not only are there alternative cosmetic products we can use instead of cruel ones that contribute to all of the above suffering, there are also alternative methods of testing.

There are many cheaper and more reliable alternative testing methods available, however some new ingredients cannot be tested using these methods. If the lives of animals were valued (as they should be), the development of non-animal testing would be a critical priority in research.

Animals are not exactly the same as us, so the way their bodies respond to substances are often different to how we would respond to them. Did you know that the Draize skin irritation test on rabbits only predicts human skin reactions 60% of the time? On the other hand, using reconstituted human skin predicts reactions accurately 80% of the time. This skin is essentially ‘grown’ in a lab.

Other alternatives to animal testing include the use of:

Or more simply, using the over 20,000 chemicals and ingredients already known to be safe and effective for humans.

There is an enormous market of certified animal-testing free, vegan cosmetics available.

One of the most stringent animal-testing free certification bodies is Choose Cruelty Free. This organisation ensures that not only are cosmetics themselves not tested on animals, but neither are the ingredients, dyes or other substances in the product.

Choose Cruelty Free has a list of certified cosmetic brands that don’t test on animals, and that don’t use animal ingredients; creating truly vegan products.

Some of our favourite brands from the list include:

Vegan, animal testing free hair care and dye products that are made in Sydney, Australia, and bottled in 100% recyclable and often recycled material packaging. These products are widely available. All genders can enjoy these products.

With a wide range of products from moisturisers, cleansers, scrubs, sunscreens and more, this brand not only is kind to animals, but the planet. The products are made in Australia, made largely with natural ingredients, are carbon neutral, and come in recyclable and often recycled packaging.

This brand creates both makeup and skincare products. These include lipsticks, foundation, blush and more. They offer refills to reduce packaging waste, and are Australian made. All products are also certified free from palm oil, and known toxins often used in the cosmetics industry.

Creating nail polishes that are free from toxins like formaldehyde often used in such products, this brand is not only animal-testing free and vegan certified but also healthier. The brand reduces plastic waste in their Australian made products by using wood in their packaging, which is all 100% recyclable and run from a renewable energy office.

An Australian made, all natural body care store that sells all kinds of organic hair, skin and personal hygiene products, like deodorant and body wash. The store stocks multiple of their own brands, which offer a range of more sustainably packaged products, such as refillable or biodegradable options.