With an ever-growing consciousness around the environmental impact of the products used in our home, so too is the awareness of the testing of household cleaning products on animals. It is important to note that a product that has not been tested on animals, often labelled “cruelty free”, does not automatically mean that it is free from ingredients derived from animals. Ingredients such as casein, gelatin, lanolin and rennet are all ingredients obtained through the unnecessary exploitation and use of animals.

When purchasing household cleaning products it’s important to ensure they are both free from animal testing, and that they use plant-based (vegan) ingredients.

If a product isn’t vegan then it isn’t truly cruelty-free.

Imagine having a tube forced down your throat and a chemical injected into your stomach, or being restrained and forced to breathe sickening vapours for hours. This is the sad reality  for millions of animals who are held captive to be tested on in laboratories across the world.

In an effort to measure toxic effects, rats, mice, guinea pigs, rabbits, dogs, chickens, fish and other animals are forced to swallow or inhale substances, or have a chemical smeared in their eyes, rubbed on their skin or injected into their bodies.

The animals are then subjected to monitoring and further testing before almost always being killed, so that researchers can look at the effects on their tissues and organs.

A growing body of scientific literature demonstrates that tests on animals often do not predict outcomes in humans.

Many non-animal test methods are now available, and are continuing to be developed.

Some of the most common forms of toxicology tests animals are forced to endure include;

This test is used to determine the danger of exposure to a chemical by ingestion, dermal contact or inhalation.

During these tests, animals will often endure excruciating pain, convulsions, loss of motor function, and/or seizures. The animals are killed at the end of the test so that a necropsy can be performed to determine internal damage. Rats and mice are the animals most often used in acute toxicity testing.

In 2005, The Humane Society Institute for Science and Policy published the report: Acute Toxicity Testing Without Animals: More Scientific and Less of a Gamble which puts forward a compelling case to end acute toxicity testing on animals.

Unlike acute toxicity, which looks at the amount of substance required to create toxic effects in one dose, repeated dose toxicity is used to evaluate chronic toxic effects; primarily effects on various organ systems.

Chemicals are usually administered to animals via a force-feeding tube that is inserted into their stomachs, though skin and inhalation methods are also used. Typically, repeated dose toxicity tests involve the use of rodents, as well as non-rodent species such as dogs.

Animals used in repeated dose toxicity tests are subjected to frequent handling, restraint and force-feeding practices. They can suffer from severe abdominal pain, diarrhoea, bleeding from the nose, mouth and genitals, convulsions and paralysis, before often dying from the test.

Animals who survive are killed at completion of the test period to look for signs of organ or body system damage.

Skin corrosion tests assess the potential of a substance to cause irreversible damage to the skin. Skin irritation tests determine the level of damage caused to skin such as itching, swelling, and inflammation. Both tests are typically performed on rabbits.

The skin irritation test involves placing a chemical on a shaved patch of skin and using another shaved patch as a control. 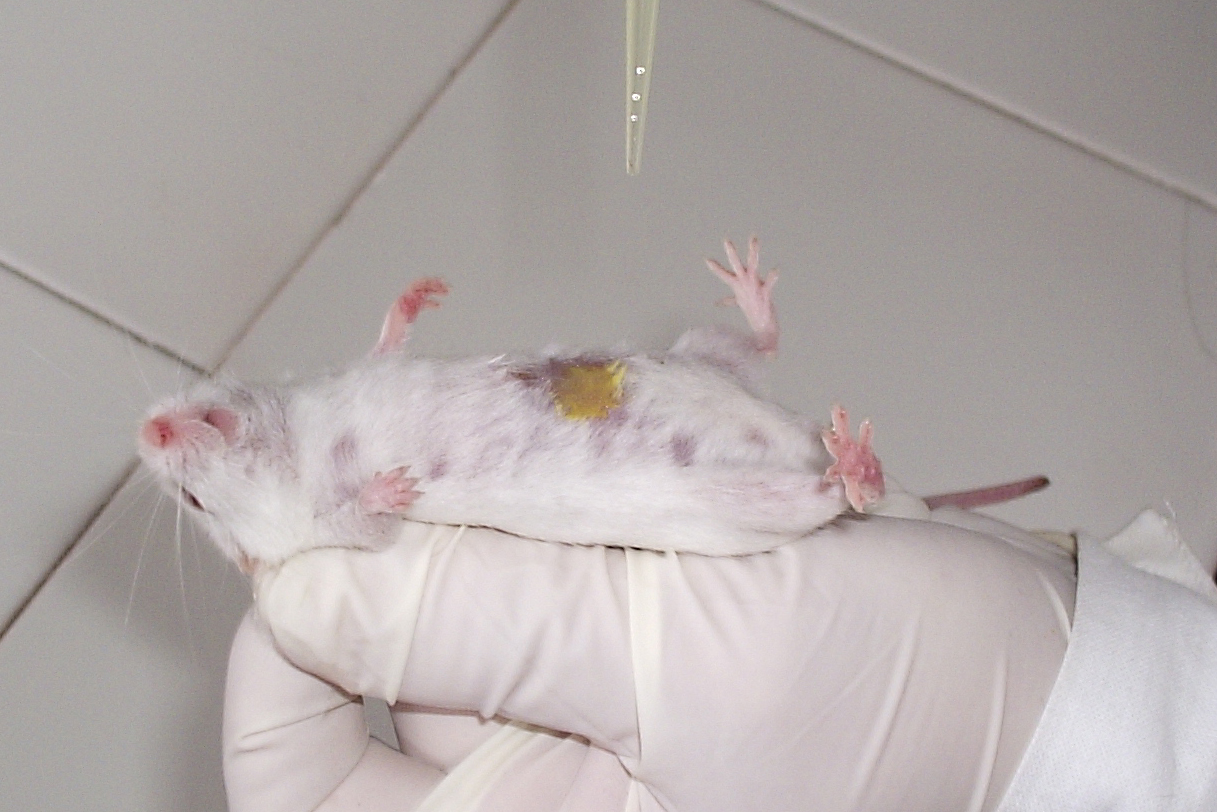 A mouse being subjected to a skin sensitisation test Image: Animal Charter CA

Pharmacokinetic/toxicokinetic tests measure the rates of absorption, distribution, metabolism and excretion of toxic substances. Some chemicals are inactivated by metabolism while others become more toxic as they are metabolised.

Animals, usually rats or mice, are given single or multiple doses of test substances through force feeding, inhalation, intravenous injection or injection into the skin. Blood samples are then taken to determine the rates of absorption, distribution, excretion and metabolism.

The animals are then killed and examined for the accumulation of the test chemicals in their organs.

Dermal penetration, or skin absorption tests, analyse the movement of a chemical through the skin and into the bloodstream. In these tests, rats are most often used. Rats’ backs are shaved and a chemical is smeared on them for an exposure period of up to 24 hours, after which the rats’ skin is washed and the animals are housed individually in “metabolism cages” to permit the collection of their excrement for analysis.

Animals are later killed and their skin, blood, and excrement are analyzed, after which the rate of skin absorption is calculated.

A mutagen is a physical or chemical agent that changes the genetic information of an organism, and thus increases the frequency of mutations. As many mutations cause cancer, mutagens are typically also carcinogens.

In the bone marrow cytogenetic test, chemicals are administered to animals, usually rats or mice, who are later killed. The animals’ bone marrow is then evaluated to examine the effects on the nucleus of the blood cells.

A carcinogen is a substance or mixture of substances that induces cancer or increases the incidence rates of cancer. Rats and mice are typically used for testing carcinogenicity. The test chemical is administered orally, placed on the skin, or inhaled over a two-year duration.

Animal health is monitored throughout the study, but most information is obtained after the animals are killed and their tissues and organs are examined for evidence of cancer.

Rats and mice are typically used in reproductive toxicity tests. Both males and females are orally given test substances prior to mating, and the effects observed both while alive and also on autopsy examination.

Developmental toxicity testing involves giving pregnant female animals, usually rats and rabbits, doses of chemicals administered orally. The animals are killed just prior to delivery and the foetuses are examined for any sign of toxic effects by the test substance.

Neurotoxicity tests aim to find out if substances cause alterations to the nervous system.

Neurotoxicity tests are often used to study the effects of pesticides and primarily involve the use of hens or rats. In the tests designed for using hens, the animals are either given a single oral dose of a substance and observed for 21 days, or they are given doses of the test substance orally on a daily basis for 28 days. The hens are observed during the test for weight changes, behavioral changes, etc.

At the end of the tests, the remaining hens are killed and their bodies are evaluated for signs of neurotoxicity.

In the rat neurotoxicity test, the animals are given daily doses of the test substance for 28 days, 90 days, or one year. The rats are observed for physical and behavioral changes during the test, and are killed at the end of the test period and examined for signs of neurotoxicity.

Ecotoxicity tests aim to determine the negative effects of chemicals entering the environment.

Fish are often used to test for both acute and chronic toxic effects. Chemicals are pumped into the water of tanks holding the fish. The number of fish who die each day is recorded, and the chemical concentration that kills 50 percent of the fish is calculated. Tests last from seven to more than 200 days, and the fish are evaluated for growth, hatching and spawning success, and mortality.

These tests may also be conducted on crustaceans such as water fleas.

In addition to ingredients in household cleaning products being tested on animals, ingredients may also be derived from animals.

Often listed using their chemically-derived names, it can be near impossible to determine if your product is entirely plant-based, adding to consumer uncertainty.

Some common animal-derived ingredients include:

Caprylic acid – a liquid fatty acid from cow’s or goat’s milk, which can also be sourced from palm, coconut, and other plant oils.

Beeswax – made by bees

There are a number of cruelty-free vegan household products available, with some popular brands listed below:

Help the Animals, the Environment and Your Wallet – Make Your Own Cleaning Products!

Making your own household cleaning products also reduces waste and will save you a heap of money!

Some effective, accessible and affordable plant-based cleaning items include:

Vinegar – Vinegar is inexpensive, natural, and tough on bacteria, mildew, and dirt.

Lemons / lemon juice – Lemon, like vinegar, is a terrific cleaning agent. The acid in lemons is antibacterial and antiseptic, and it acts as a natural bleach

Bi-carb / baking soda – From the everyday cleaning chores to those jobs requiring a little more elbow grease, Bi-Carb Soda (aka bicarbonate of soda or baking soda) moonlights as a magical cleaning fairy